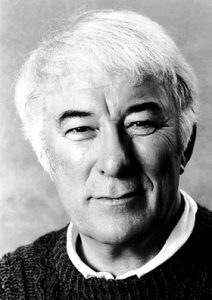 Seamus Heaney was a Northern Irish poet, playwright, peace activist, and winner of the Nobel Prize in Literature. From his own perspective amid Northern Irish political conflict, Heaney penned “The Cure at Troy” as a tribute to Nelson Mandela and an indictment of apartheid in South Africa. Heaney passed away on August 30 2013 and was followed less than four months later by Nelson Mandela himself on December 5 2013. It seems appropriate to share Heaney’s poem for Mandela for this month’s Ministry in Context.

The Cure at Troy: A Version of Sophocles’ Philoctetes

Human beings suffer,
They torture one another,
They get hurt and get hard.
No poem or play or song
Can fully right a wrong
Inflicted and endured.

The innocent in gaols
Beat on their bars together.
A hunger-striker’s father
Stands in the graveyard dumb.
The police widow in veils
Faints at the funeral home.

History says, don’t hope
On this side of the grave.
But then, once in a lifetime
The longed-for tidal wave
Of justice can rise up,
And hope and history rhyme.

So hope for a great sea-change
On the far side of revenge.
Believe that further shore
Is reachable from here.
Believe in miracle
And cures and healing wells.

Call miracle self-healing:
The utter, self-revealing
Double-take of feeling.
If there’s fire on the mountain
Or lightning and storm
And a god speaks from the sky

That means someone is hearing
The outcry and the birth-cry
Of new life at its term.