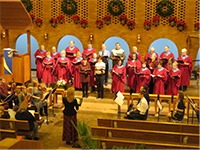 Living through transition is hard. Transitions in which the baton of leadership isn’t passed on smoothly make them even more difficult to take part in. If being a residential student at Luther Seminary in the 2016-17 academic year taught me anything, this truth would be at the very top of the list of things learned. However, that academic year also equipped me with a lot of important tools, tools with which I can approach the newness and pain of post-“major change” anxiety that a lot of churches and ministry sites might be experiencing.

My internship site experienced its fair share of transitions in the last few years with the senior pastor pursuing another call and his spouse, who had directed the sanctuary choir and organized all things music during her tenure at Our Savior’s, leaving with him. One of the major roles she played in her position was organizing the annual Music Sunday on Advent III, a worship service that celebrated and showcased the myriad musical groups housed at Our Savior’s. With her departure, the service no longer had an organized front in its planning. Seeing a need in my context that aligned with my own interests of music, liturgy, and creative imagining in the face of transition, I discerned my way into the role of organizer of Music Sunday for Advent 2017.

The nitty gritty of this project had me planning a rather elaborate church service: developing litanies and selecting readings to be used between songs, selecting a hymnody for the day that kept us within the season of Advent while also being familiar enough for the whole congregation to sing, and managing the logistics of these musical groups moving about the space without someone having to run across the sanctuary to move from the adult choir to the bell choir (which has happened in years past).

Beyond the detail oriented work, there were also a lot of conversations. Informal conversations with congregation members who shared some of their fond memories of Music Sundays of old aided me in gathering a sense of what the service should include to feed the needs of the assembly. Meetings with ensemble directors to talk music selection and rehearsals helped me to see how invested these leaders were in making this worship service a spectacular moment of praise. These moments of connection granted me the wisdom to see that this community was invested in this service; these was not just another event that came and went during the church year, but a time during which the fellowship and joy that comes with the advent season is most palpable.

In the end, the service was a grand success. The musical offerings filled the space with songs of longing and praise, the assembly’s voices joined in the refrain, and the musician’s tones blended it all together in a tapestry of Advent joy. In addition, as this community continues to get its feet underneath it again after the many transitions it’s experienced, the intentional conversations and planning that went into this service helped us to begin visioning for next year. With a little extra lifeblood pumped back into Music Sunday, many voices chimed in about their desire to be involved in crafting next year’s service. In the wake of jarring transition, instead of grumbling about how things “aren’t what they used to be,” people are beginning to speak up for the sake of renewal and imagination.

It’s that hope that follows major transition that makes this project important beyond the walls of my internship site. While this project was affirming of my call to serve the church, it was also affirming that the grief and pain that one experiences during the front end of transition can eventually lift into a renewed sense of purpose and mission. While this project examines only one piece of Our Savior’s renewal, it serves as a testament to what solid discernment and hope can bring into the life of a church.