Why was this project subject of interest to you?

This project allowed me to work directly in three of my goal areas – administrative pastoring, teaching the body of Christ, and empowering community care.

Why was your context a good fit for this project? 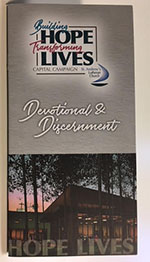 The opportunity to be part of a capital campaign of this scale does not come around very often! St. Andrew’s also had the energy and resources to create these booklets which was fun for me. The idea for a devotional came up in a capital campaign planning meeting and I happily stepped up to the task.

Why might this project be of interest to your fellow interns?

I appreciated the chance to build more spiritual vocabulary around stewardship.

I created a physical devotional booklet, and the content was posted online as well. Each week has a Sunday devotion, including Scripture, a meditation, and prayer. Each Wednesday had the same questions for reflection and discernment, with space to write one’s thoughts.

The physical books are available at both hospitality desks on the church campus – in the Sanctuary building where traditional services are held, and the Great Hall building where contemporary services are held. We encouraged congregants to take the books home and use them as a tool for reflection and prayer. The devotions were also posted weekly on the capital campaign website, linked to the main St. Andrew’s site.

To provide a spiritual tool for the St. Andrew’s community as they discerned their gifts to the “Building Hope, Transforming Lives” or “Hope Lives” capital campaign.

The devotional was part of a larger hope of the capital campaign, that the community would see this project not just as buildings, but as an investment in the growing ministries and future of St. Andrew’s. Being able to engage a core part of the community, its faith, in such an investment was important. I hoped that my devotional writings and the practice of prayer and discernment would help people grow in their faith in this context of growing ministries too.

The Outcomes and Transformations the Congregation experienced:

The devotional facilitated a deeper devotional practice and use of holistic giving language for many folks in the community. This is also the first time a devotional was created for a capital campaign, which folks appreciated – the connection between giving and discernment/prayer/devotion is made clear.

Outcomes and Transformations you experienced:

This project allowed me to develop confidence in making my theological musings contextual and approachable. Being able to collaborate with such a range of folks in the community, from executive-level staff to high school youth, made me feel pastoral and holistic in my work. It has also opened the door to folks having deeper theological conversations with me, which has been such a gift.

What “image” exists in your memory from your internship project experience?

The image that I first thought of was the cluster of blue post-its that populated my desk through the beginning stages of this devotional. Each topic had its own note with the scripture on it, and I eventually organized them in neat columns to get the final order. But of course, I have the physical booklet to show for the project too.

How might this project experience influence your ministry in a settled ministry call?

This project helped me develop confidence in my writing abilities in a very public way. I also was able to incorporate the newer-to-me language of stewardship as holistic giving, not simply financial giving, which will be helpful in future congregations. I’m so grateful I had a platform to highlight youth authors in a substantive way too. The combination of writing, stewardship, and highlighting young voices helped me learn how I can synthesize gifts from the entire body of Christ and create meaningful tools for the community.