Central Lutheran Church in Everett, Wash., is one of those marvelous churches with a long-term investment in the internship program. KatieEmery, who now serves there, is the congregation’s 18th intern. Pastor Jeff Russell of Central and Intern Emery were good enough to answer a few questions for us. 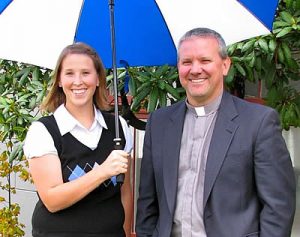 1. Jeff, how about a quick picture of the Everett community and the nature of Central’s mission there, and a snapshot of what makes you as a person unique?

Central is a 106 year-old congregation located in the center of the city. It is a small congregation with around 250 active members. Central worships with about 120 people per Sunday. The annual operating budget is $220,000. Each year we raise an additional $20,000 off budget for local- and extended-mission support. Our significant mission activities include a 25-student preschool; bi-monthly parking-lot dinners, holiday food baskets, and serving as an internship congregation. We also host two Lutheran Counseling Network therapists and serve as Red Cross Emergency Shelter.

Naval Station Everett is the homeport of the aircraft carrier U.S.S. Abraham Lincoln, the world’s largest warship. Everett is home field and home ice of two of the coolest minor league teams ever conceived: the Aquasox (Northwest League A Baseball) and the Silvertips (WHL Hockey).

The Port of Everett hosts the second largest pleasure craft marina on the west coast. Few places in the world have mountain glaciers and saltwater bays so close to one another. And, boating and hiking and outdoor recreation are fantastic if you can endure the dark, wet gloom of November through February.

I have served at Central Lutheran for almost 20 years. In addition to life in the congregation, I stay active in the community. I coach seventh grade football at the same school where my wife teaches history. (We just finished another undefeated championship season.)  I also serve as a public official. One year ago I was elected to a six-year term on the Everett Public Schools board of directors, a five-member board responsible for an 18,000-student school district.

2. What is it that keeps the internship program important to your congregation?  In the same way, you have been supervising for a number of years.  What do you think of as the key to supervision?

The people of Central Lutheran recognize this work as vital for the future of the church. More than a program, internship is an integral part of Central’s  mission. This adds a significant dimension of annual purpose to the life of the congregation.

At the same time, the presence of a different intern each year brings a new fresh voice and set of skills. But even more important than doing, is being. It is a great joy for us to welcome and share a year with our interns.

Herein lies what I consider to be the essential key to successful internship supervision—relationship. It is all important for the supervisor to

3. Katie, what’s it like to be in a congregation that has a long history of hosting interns?

I feel extremely blessed to have been placed in a congregation with so much experience with interns. When you are coming into a congregation that has had so many interns, there’s always a little fear that you are going to be compared to the ones before you, for better or worse.

But by this point, the congregation has hosted enough interns to truly realize that each intern is unique. They have given me a lot of room to let my personality and faith speak for itself without being influenced too heavily by interns before me.

One thing I especially appreciate about Central, and one of the reasons I think that the internship program has lasted as long as it has here, is that the whole congregation takes ownership of making their interns feel at home. Nearly everyone has gone out of their way to welcome me and include me in community activities. I had heard this from two of the previous interns, and the congregation has fully lived up to its reputation of being an outstanding internship site.

4. Katie, how does Central compare to your home congregation and other congregations you have known?  What are you enjoying the most about internship and your ministry there?

Central seems to be a pretty typical ELCA congregation, both trend-wise and demographically. It is located downtown. The congregation originated in 1904, so there is a lot of history. The membership is fairly elderly and mostly Caucasian, though that is not true of all. That is different than the other congregations where I have belonged.

I grew up in a mission-start congregation, Ascension Lutheran, in Fond du Lac, Wis. The congregation has a sort of suburban feel to it. My family has been a part of that congregation from day one in 1990

I grew up with that church and was always very involved in their ministries. I was a charter member of any of the church’s traditions. It is composed largely of young families. And, at least for as long as I was an active member there, they were growing steadily, and have had two building projects in the past 10 years.

The parish that I attended as my teaching congregation, Salem English in Minneapolis, is an urban church. They used to have their own building, but they couldn’t afford the upkeep and moved into the building of a UCC church that they partner with in almost every respect. They now worship in an art gallery. It is a very small and eclectic congregation. They are wonderfully faithful, but very different than either Ascension or Central.

It’s nice to have a feel for three fairly different congregations because as I prepare to be a pastor, I have no idea what kind of parish I may end up serving.

What am I enjoying most about being here? I’m not sure there is a most. I enjoy almost everything. As I said before, the congregation is extremely welcoming and a great place to work. I go to work most days excited about what I get to do that day.

I’m sure this is going to go straight to his head, but my supervisor, Jeff, is fantastic. He allows me room to explore and define my pastoral identity. He really seems to love his job, which makes me believe that I, too, can still love being a pastor 20 years into ordained ministry.

He sets an example of a sustainable lifestyle for a pastor and encourages me to develop a sustainable rhythm now, so that I will have that foundation when I am on my own.

I guess one of the things I appreciate most is that I will be, and really already mostly am, deeply involved in everything I will be expected to do as a solo pastor. Jeff leaves in the summer so the intern is the pastor during that time. And I think that will be the most formative part of my internship.

Plus, I get to drink coffee every day, which is very important in the life of a Lutheran pastor. And out here, it’s good coffee.

5. What is it like doing ministry in one of the most notoriously unchurched parts of the country?

Jeff: Being the church and serving as a pastor in the Pacific Northwest has both blessings and banes. Except for my three years of seminary, I have lived in this region my entire life and have served as a pastor here for 23 years. My perspective about faith in the Pacific Northwest is that it would be a mistake to say the population is overtly hostile to religion, spirituality and the church. It is more a matter of the majority of the populace either being disinterested in religion or desiring to be spiritual apart from the church community.

People are spiritually open and tolerant—just don’t expect them to come to church. Less than ten percent of the population is in worship on a Sunday morning. It may be more socially acceptable to streak down Colby Avenue than talk about Jesus to a stranger, or a friend for that matter.

The bottom line is that there are no cultural props for belonging and participating in the church. Church membership brings no cultural status in the Pacific Northwest. The private nature of religion makes for significant challenges in communication. At the same time, there is freedom in that church participation is a counter-cultural activity. Those who do participate in congregational life tend to do so with a high degree of commitment. All of this makes for a more than interesting place to preach, teach, serve, and reflect theologically.

Katie: Honestly, that is one of the main reasons I wanted to do my internship out here. I was born and raised in the Midwest and nearly all of my friends were affiliated with some religious group or another. When looking at the religious trends of America, I am inclined to believe that the rest of the country is changing to be more like the Pacific Northwest. As a pastor, going out into a church moving in that direction, I want to know what it was like to be a pastor in an unchurched environment.

When I told people that I wanted to do my internship out here, almost without fail, they would say something about how everyone worshipped trees or that I was going to preach to the heathens. I got the impression from some that people out here were almost hostile toward religion.

But I must say, those notions are extremely incorrect. I would say that more than anything else, the culture out here is indifferent to religion. People are just as inclined to communicate with the divine by going on a hike in the mountains as they are to be in a pew on Sunday, but there does not seem to be a lot of competition or hostility between people because they choose one or the other. And, the more I reflect on this fact, the more I am affirmed in my belief that the rest of the country is working its way in that direction. And I feel really fortunate to be able to work in this environment.

Recently a supervisor was tucking his 7-year-old son into bed. The young boy said to his Dad, “When I grow up, I want to be an intern.”

A sampling of photos from this fall’s cluster meetings. 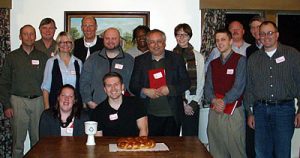 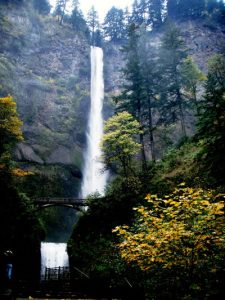 If you were an intern in Oregon, you could visit the breathtaking Multnomah Falls on the way to the cluster retreat. 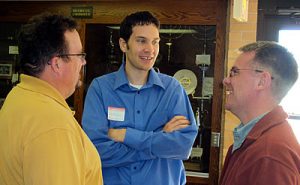 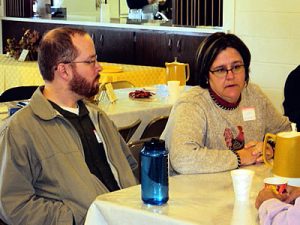 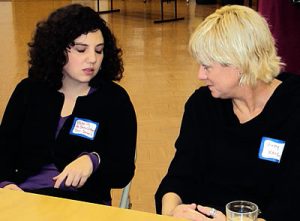 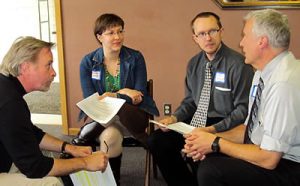