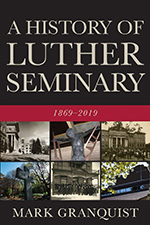 Mark Granquist, professor and Lloyd and Annelotte Svendsbye Chair in Church History, is author of “A History of Luther Seminary: 1869-2019.” The book was published last year as the seminary celebrated its sesquicentennial.

Granquist starts with an overview of Lutheran theological education, examines Norwegian American Lutheranism, and covers the histories of the seminaries that merged to become Luther Seminary, particularly Luther Theological Seminary, Augsburg Seminary, and Northwestern Lutheran Theological Seminary, before moving into the story of Luther Seminary itself. While he makes it clear that this history was written neither to teach a moral lesson nor to predict the seminary’s future, he does help readers reflect on the patterns that are revealed and their implications. Among these patterns are constant challenge, faithful innovation, and a sense of vision and community, even in the midst of conflict.

L. DeAne Lagerquist, Harold H. Ditmanson Professor of Religion at St. Olaf College, writes, “The history of Luther Seminary is not only long, it is also the story of multiple institutions, each with its own characters, setting, and distinctive concerns. Granquist conducts his readers through the twists and turns of these intertwining stories with clarity. He highlights each school’s relationship with its larger ecclesiastical (and often ethnic) community. At the same time, he points to the similarity of purpose and practice that allowed these schools to undertake the challenging process of combining their work. This complex story also illumines the ways in which the churches associated with these schools adapted to their ever-changing cultural context.”