Home / Book Recommendation: ‘Sealed: An Unexpected Journey Into the Heart of Grace’ 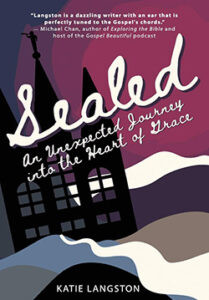 Katie Langston ’21 M.Div., director of digital strategy and executive communication specialist at Luther Seminary, is author of “Sealed: An Unexpected Journey Into the Heart of Grace,” published by Thornbush Press in April. “Sealed” tells the story of Langston’s spiritual journey from being a devout Mormon, compulsively anxious about her worthiness before God, to encountering the grace of Jesus—and eventually being called to Lutheran ministry.

In candid but not sensationalized ways, Langston describes little-understood Mormon practices and teachings while giving a compelling account of her conversion to orthodox Christianity. She explores faith, doubt, belonging, and most importantly, how God’s grace broke into her life and changed everything for her. Her story is intended as a bridge-builder, a way to help non-Mormons better understand Mormonism, and Mormons mainstream Christianity. Ultimately, it’s for anyone who marvels at the miracle of grace and longs to see it whenever and however it shows up in the most unexpected of places.

Jana Riess, author of “The Next Mormons” and “Flunking Sainthood,” writes, “Langston’s powerful and deeply theological memoir speaks to the steep costs of religious perfectionism. It will resonate with anyone who has never quite belonged and longs for what she has found on the other side: the grace of a loving God for whom she was already, always, more than enough.”