She is the author of the book, In Her Image. Recovering Motherhood in the Christian Tradition (Baylor University Press, 2022). Her present research focuses on mothering and children in the Christian tradition. A selection of scholarly papers given on this topic include “White Mothers, Black Mothers and the Bible” (2016), “The Redeeming Act of Giving Birth: Martin Luther’s Theology Concerning the Bodies of Mothers” (2014), and “Children in the Theologies of Martin Luther and Karl Barth” (2015).

Her earlier research focused on the life and thought of Karl Barth and twentieth-century theology. She is the author of Karl Barth’s Dialogue with Catholicism in Göttingen and Münster (Mohr Siebeck, 2010), the translator of Karl Barth’s The Word of God and Theology (T&T Clark, 2011), and a contributing translator to Barth in Conversation: Volume 1, 1959-1962, (Westminster John Knox, 2017). She is also the author of several essays about Karl Barth’s theology that appear in The Westminster Handbook to Karl Barth; the Karl-Barth Handbuch; Thomas Aquinas and Karl Barth: An Unofficial Catholic-Protestant Dialogue; and the T&T Clark Handbook of Political Theology.

Marga is a trained racial justice facilitator through the Minneapolis YWCA, and a member of the American Academy of Religion.

She enjoys speaking on feminism, gender, race, mothers, and children in the Christian tradition.

Saint Paul is home, where she lives with her two boys, two guinea pigs, and Mariah the poodle. 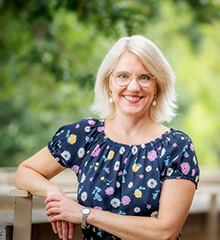