David Tiede was named president of Luther Seminary in 1987 after serving on the faculty in the New Testament department for 16 years. He retired June, 2005.

His teaching career began in 1967 when he was a summer instructor in Greek at Harvard Divinity School. He became a teaching fellow in New Testament at Harvard University in 1969 and was a part-time instructor in religion at Northeastern University in 1970. He was assistant professor of religion at Scripps College and assistant professor of New Testament at Claremont Graduate School in 1970-71.

Ordained in 1971, he served as associate pastor of Trinity Lutheran Church, Minneapolis, in 1972-75. In June 2000 he was elected vice president of the Association of Theological Schools (ATS) in the US and Canada. Two years later, he was elected president of ATS. He serves on the board of Directors for In Trust magazine.

His service as President of Luther Seminary has given him opportunities to sustain his New Testament scholarship, especially in Luke and Acts, and to draw upon these resources in his leadership in theological education. His books, articles, and lectures focus upon the leadership the church needs in a new era of apostolic mission in a world of many cultures and religions.

He has written the textual notes for the Gospel of Luke in the Harper Collins Study Bible (Cambridge: NRSV, 1993) and for The Gospel of Luke and the Book of Acts in The Access Bible (Oxford: NRSV, 1999). His most recent of ten books include Jesus and the Heritage of Israel(ed. With David Moessner, 2000); Jesus and the Future (1990); Holy Week: Proclamation 4 (1989); Luke: Augsburg Commentary on the New Testament (1988); Search Bible Studies, Units I and II, Acts(1983); and Prophecy and History in Luke-Acts (1980). 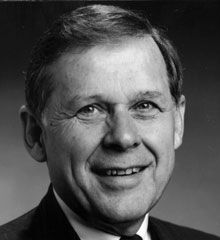