Leon Rodrigues joined Luther Seminary in 2019 as the director of diversity, equity and inclusion and subsequently was appointed as vice president for inclusion and belonging in 2022. He was also asked to assume the role of interim dean of students at the seminary in 2022.

Prior to joining Luther, Rodrigues worked in higher education from 1995 until 2016, serving as the program coordinator for the Youth Development Leadership masters program at the University of Minnesota (1995-99); a multicultural educator and assistant professor at the University of Minnesota’s Center for Youth Development (1999-2003); the associate dean for diversity and community at Bethel University (2003-6); chief diversity officer, special assistant to the president, and associate professor at Bethel (2006-14); and chief diversity officer for the Minnesota State Colleges and Universities system (2014-16). From 2017 until 2022, he was president and CEO of Global Horizons Incorporated, a nonprofit organization that supports Christian ministry nonprofits and NGOs that aim to reduce poverty, address educational disparities, and provide services in disadvantaged communities around the world.

Rodrigues is a member of the National Association of Diversity Officers in Higher Education, the American Council on Education, the American Association of Colleges and Universities, Facing Racial Equity Collaborative – St. Paul, Overcoming Racism Leadership Institute – St. Paul, the Council for Christian Colleges and Universities – Commission for Advancing Intercultural Competence, and the Intercultural Development Inventory, Qualified Administrators. His many volunteer activities include serving as vice chair for the National Association of Diversity Officers in Higher Education, MN Chapter (2015-16), serving as a founding member of the Higher Education AntiRacism Team in MN (2006-22), acting as a delegate to the United Nations World Conference for the Roy Wilkens Center for Human Relations and Social Justice in 2001, founding Frogtown Transformation Circles in 2001, and serving as a board member for Minnesota Educational Equity Partnership (2014-16), Girl Scouts, River Valley Council (2015-16), Nellie Stone Johnson Scholarship Fund (2015-16), Africa Classroom Connection (2010-16), Desmond Tutu Diversity Trust in South Africa (2006-15), and Camp Fire Boys and Girls, Minneapolis (1998-99). 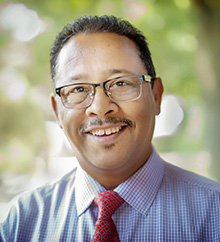