Farag received the bachelor of science degree from the American University in Cairo, Egypt, in 1977. She earned her master of divinity from Harvard Divinity School, Cambridge, Mass., in 1997 and her doctorate from the Catholic University of America, Washington, D.C., in 2003. She also studied as a research fellow at the Institute of Christian Oriental Research, Washington, D.C.

A monastic of the Coptic Orthodox Church, Farag is a frequent lecturer. She authored St. Cyril of Alexandria, A New Testament Exegete: His Commentary on the Gospel of John. Gorgias Press, 2007, and Balance of the Heart, Desert Spirituality of Twenty-First Century Christians, Cascade Publishing, 2012.

She is a member of the North American Patristics Society, American Academy of Religion, Society of Biblical Literature, The Models of Piety in Late Antiquity Research Group. 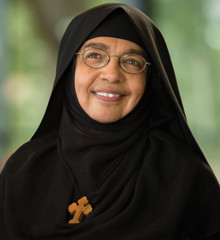