David Preus joined the Luther Seminary faculty as director of the Global Mission Institute and distinguished visiting professor in 1988, the same year he was named bishop emeritus of The American Lutheran Church (ALC).  He retired from his positions at Luther Seminary in 1994.

He has been recognized with the Commander’s Cross, the Royal Norwegian Order of St. Olaf, the St. George’s Medal from the Orthodox Church of Georgia, the Anti-Defamation League’s Torch of Liberty, the Minnesota Religious Hall of Fame Award from Temple Israel, St. Thomas Aquinas Medal from St. Thomas University, the Pax Christi Award from St. John’s University and honorary doctorates and distinguished service awards from nine colleges and universities. 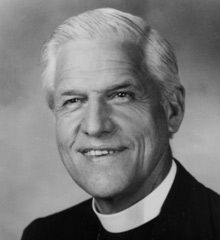