Norman Wente came to Luther Seminary as librarian in 1968 and was given the rank of professor ten years later.  He had been assistant circulation librarian at the University of Illinois in 1966-67.

As a member of the advisory committee of the Reformation Research Library Project of Lutheran Brotherhood since 1983, and as director since 1986, Wente has been instrumental in the development and direction of the extensive collection of microfilmed research documents housed in the seminary’s Rare Book Room.  The collection dates from 1500 to 1648 and includes works by English and continental Protestant and Catholic reformers.

He also was the local chair and coordinated arrangements for the Eighth International Luther Congress on the Luther Seminary campus in 1993.
Wente was a scholar at the Institut Oecumenique de Recherches Theologuiques in Jerusalem in 1982.  He has been a library consultant for Faculdade Teologia, Sao Leopoldo, Brazil (1981), and in Papua New Guinea, New Zealand and Australia (1989). 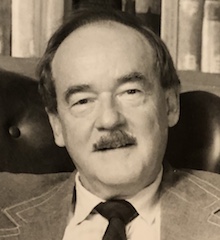