Paul Sponheim first came to Luther Seminary as a visiting lecturer in 1964, 1966, and 1969 before joining the faculty as associate professor in 1969.  He was named professor of systematic theology in 1974, and served from 1974 to 1976 as dean of academic affairs.

He was professor and chair of the department of religion at Concordia College, Moorhead, Minn., where he joined the faculty in 1961.  He was visiting professor of systematic theology at Lutheran Seminary in Gettysburg (Pa.) in 1966-67, and lecturer in religious studies at the University of Chicago in 1960-61.

He has been theologian in residence at Abbott-Northwestern Hospital in Minneapolis, and served on the boards of The City, Inc., Minneapolis Federation of Alternative Schools, the Gethsemane Center for Spiritual Formation, and the Project on Science, Religion and Public Policy of the Hubert H. Humphrey Institute.

Sponheim represented the church nationally in the Faith and Order Commission (NCC) and the Standing Committee on Studies (LWM).  He was also a member of the Inclusive Ministry Task Force of the Southeastern District of the ALC and of Region 3 of the ELCA.

Sponheim attended the University of Minnesota and received the B.A. degree in 1952 from Concordia College, Moorhead, Minn., which bestowed on him the honorary degree of sacred theology in 1992.  He earned the B.Th. degree from Luther Seminary in 1957, and the M.A. and Ph.D. degrees from the University of Chicago in 1960 and 1961.  He has also studied at the University of Copenhagen, Denmark, the Claremont School of Theology in California, and Cambridge University in England, and at The Institute for Ecumenical and Cultural Research at St. John’s University.

His books are: Existing Before God: Søren Kierkegaard and the Human Venture, Fortress, 2017. Love’s Availing Power (2011), Speaking of God (2006), The Pulse of Creation: God and the Transformation of the World (1999); Faith and the Other: A Relational Theology (1993); Lutherans and the Challenge of Religious Pluralism (co-author, 1990); Suffering and Redemption: Exploring Christian Witness within a Buddhist Context (co-author, 1988); A Primer on Christian Prayer (co-author, editor, 1988); God: Question and Quest (1985); Christian Dogmatics (co-author, 1984); Faith and Process (1979); The Future of Empirical Theology (co-author, 1969); Kierkegaard on Christ and Christian Coherence (1968); and Contemporary Forms of Faith(1967). 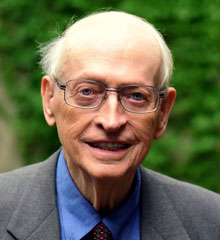