Randolph Nelson became a member of the Luther Seminary faculty as an assistant professor in 1975 and was named the Melvin A. Hammarberg professor of contextual education in 1982.

He was assistant to the pastor of Resurrection Lutheran Church in Chicago in 1968-75 and was ordained in 1975. During that same period, Nelson was affiliated with Lutheran School of Theology in Chicago as instructor in church and society (1969-71); acting dean of students (1971-73); and assistant to the director of field education (1973-75).

He was active on the Sexual Harassment and Exploitation Ombuds Team of the Minnesota Synod, LCA, and the Saint Paul Area and Minneapolis Area Synods, ELCA, from 1987-1993.

A graduate of Gustavus Adolphus College, St. Peter, Minn., he earned the M.Div. degree from Lutheran School of Theology, Rock Island and Chicago in 1968, and the M.A. and Ph.D. degrees from the University of Chicago Divinity School in 1970 and 1978. He has also studied in Erlangen, Germany, and Cambridge, England. He received a scholarship from the Bavarian State Government, a Fulbright Travel Grant, and a Lutheran Brotherhood Graduate Study Grant.

He wrote Making Faithful Choices: How Do I Decide?, a participant’s book for “Cross Signs,” a Bible study series for adults (1993) and has written a number of book chapters and magazine articles. 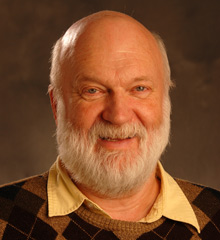