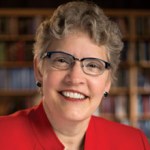 The Luther Seminary Board of Directors has elected the Rev. Dr. Robin J. Steinke to be the seminary’s next president. Steinke is the first woman in the 145-year history of the seminary to be named president. She will succeed the Rev. Rick Foss, who served as interim president since December 2012. Steinke will take office on June 1, 2014.

Steinke is currently the dean of the seminary and professor of theological ethics and public life at Lutheran Theological Seminary at Gettysburg, where she has served since 1999. She previously served as an Evangelical Lutheran Church in America (ELCA) pastor; a training manager and financial planner at American Express Financial Advisors; and a middle school band director in Marietta, Ga. Steinke is a graduate of Augustana College in Sioux Falls, S.D. She holds a Master of Divinity and a Master of Sacred Theology from Trinity Lutheran Seminary in Columbus, Ohio. She received her Ph.D. from the University of Cambridge in England.

“Robin is a proven leader who is uniquely qualified for this position. First and foremost, she has a strong faith and is committed to our mission of educating leaders for Christian communities,” said Gus Blanchard, a member of the board of directors and chair of the presidential search committee. “Her forward-looking leadership skills, ability to build strong, productive relationships, financial acumen and commitment to academic quality, ministry and mission make her a marvelous fit for Luther Seminary. We are thrilled to have her join us as our next president.”

Steinke is known for her strategic leadership and passion for sharing the gospel. She is involved in a number of important church and academic initiatives. She is currently co-chairing the national ELCA Theological Education Advisory Council that is evaluating and exploring the future of theological education. She serves as the ELCA Representative to the Lutheran World Federation Council and chairs their Endowment Fund. She is a member of the ELCA Ecclesiology Task Force and serves on a number of other church and academic committees. In June, she will conclude her six-year term as a commissioner for the Association of Theological Schools’ Commission on Accrediting.

“I am humbled and honored to be called to this important work in the life of Luther Seminary and the church,” Steinke said. “I am mindful of the strong legacy that is Luther Seminary. As we look forward, I believe we must work in new and nimble ways to imagine a sustainable future. This effort is complex and multifaceted, yet I can’t imagine a more exciting time to be doing this creative work.”

Luther Seminary educates leaders for Christian communities across the country and around the world. It is one of eight seminaries in the ELCA. Established in 1869, Luther Seminary is the result of six separate institutions consolidating through a series of mergers—the first in 1917—into a single seminary. Luther Seminary has educated more than one-third of ELCA pastors, in addition to an increasing number of ELCA lay professionals and leaders of many global Lutheran and ecumenical churches.