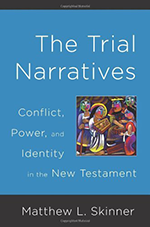 Professor of New Testament Matthew Skinner is author of “The Trial Narratives: Conflict, Power, and Identity in the New Testament,” published by Westminster John Knox Press in 2010. In the book, Skinner analyzes all four accounts of the trial of Jesus, as well as trials of his followers, including Paul and Stephen, showing how the narratives shaped early Christian identity.

Skinner begins his book by asserting that “courtroom proceedings tell us about ourselves, our world, and our shared existence.” He asserts that the trail narratives in the New Testament are worth studying, because, among other things, they are “deeply significant for understanding the biblical stories about Jesus and his followers as well as the social conflicts and power struggles that these people’s claims and actions repeatedly ignite. These stories are also worthy of analysis because of their theological implications, such as the relationship between believers and governing authorities.