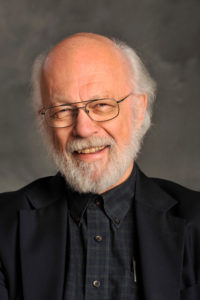 Terry, 84, died at home on what would have been his mother’s 113th birthday. He had been diagnosed with plasma cell leukemia. Terry is survived by his wife of 64 years, Faith; daughters Tanya Fretheim and Andrea Fretheim; grandchildren Kelly, Shannon, and Emre; his youngest brother, Stephen; sister-in-law Judy; four nieces and nephews; as well as many extended family and friends. He is preceded in death by his parents Erling and Marie, brothers Gary and Mark, sister-in-law LaVila, aunt Ada, and uncle Phil.

Terry was the oldest of four boys—his father was a Lutheran pastor, his mother, a nurse. In addition to his dad, his uncle and his grandfather were also Lutheran pastors. His first steps on the Luther Seminary campus came in 1939 when he was three years old, and his dad was attending Luther Seminary. As a high school student, Terry attended Augustana Academy in Canton, SD, and went on to Luther College in Decorah, IA, where he sang in the Nordic Choir under Weston Noble, earned his BA in 1956, and met his soon-to-be bride, Faith. They were married in August 1956, and shortly thereafter, Terry and Faith moved to the Twin Cities, where Terry took his next steps on the Luther Seminary campus—this time as a student himself. In addition to being a student, he was a teaching fellow in Greek in 1958–60 and earned his MDiv in 1960. Terry received a Fulbright Scholarship and studied at the University of Durham, England, from 1960–61. He was an instructor in Old Testament at Augsburg College and Seminary, Minneapolis, from 1961–63 and assistant professor of religion at Augsburg College from 1967–68. In between those years, Terry studied at Princeton Theological Seminary, taught Old Testament from 1965-67 as a student, and earned his ThD in 1967.

During his 1967–68 year at Augsburg, Terry received a call from Luther Seminary to teach Old Testament. He accepted and was ordained in June 1968—the same day his daughter was baptized. He served the Dennison and Vang Parishes in Dennison, MN, while simultaneously stepping onto Luther Seminary’s campus as an assistant professor, wrote his first two books, and became a dad, twice. In 1971, Terry and Faith and their two daughters, Tanya and Andrea, moved to St. Paul a stone’s throw from the Luther Seminary campus. During his 45-year career at Luther Seminary, he taught Old Testament theology, had a 10-year stint as Dean of Academic Affairs, and team-taught a class with Dr. Paul Sponheim (lovingly dubbed “the Heim Brothers”) for 20 years titled, “God, Evil, Suffering.” He took sabbaticals in 1975–76, associated with Heidelberg University, Germany, and wrote The Message of Jonah. In 1982–83, he associated with Mansfield College, Oxford University, England, during which time he wrote The Suffering of God, and in 1988–89 associated with University of Chicago, Chicago, IL, where he wrote Exodus: Interpretation: A Bible Commentary for Teaching and Preaching. Starting in 1988, Terry spent weekdays in St. Paul and weekends in Chicago when Faith took a job with the Women of the ELCA at the Churchwide office in Chicago. Terry was rostered in the Southwestern Washington synod and was a member of the candidacy selection committee for more than 20 years. During the summers of 2003 and 2004, Terry associated with Tyndale House research library, Cambridge University, England, where he wrote God and World in the Old Testament: A Relational Theology of Creation. In total, Terry wrote more than 25 books on Old Testament theology—including Creation Untamed: The Bible, God, and Natural Disasters and his most recent book published in August 2020, God So Enters Into Relationships That…—and countless articles which have helped shape pastoral students over the last 50 years and counting. Terry officially retired from Luther Seminary in 2013 after 45 years of service.

Terry was an advocate and leader in some key changes within the Lutheran church. As a biblical scholar he participated on the theological team that made the ordination of women possible in the ELCA. He was one of the first to help make distance learning a possibility for students who could not attend Luther Seminary in the traditional way (long before Zoom and remote learning was commonplace). And, Terry worked with the ELCA Task Force on Sexuality which opened the way for the full participation of people who identify as GLBTQ, including marriage and ordination.

Joining in 1972 and continuing until this day, Terry and Faith have enjoyed reading and discussing books monthly with a group of Seminary professors and their spouses with whom they have forged life-long friendships.

Terry’s family will remember the sweet smell of his pipe tobacco wafting through his office, classical music playing in the background, and the clacking of his typewriter keys and later computer keyboard as he wrote, and wrote, and wrote…

Please share your memories of Rev. Dr. Fretheim in the comments section below, which we are using as a guestbook.