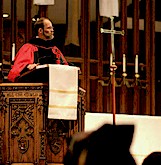 Craig Koester, ’80, professor of New Testament, is featured prominently in a new 45-minute video from the ELCA titled: “The Life of Apostle Paul with Rick Steves.” The video follows noted public television host Rick Steves as he travels through Turkey and Greece, following in the footsteps of the Apostle Paul. Koester provides biblical context and scholarly observation throughout the piece. He became involved when the ELCA producer discovered the extensive information about Paul’s journeys on Koester’s Luther Seminary-hosted Web site, www.luthersem.edu/ckoester/paul/main.htm. Find out more about the video by visiting www.elca.org/mosaic/