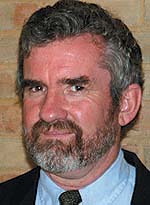 David Stewart has been named director of library services at Luther Seminary. He began his call July 1, 2004. Previously he was associate librarian in research services at Princeton Theological Seminary, Princeton, N.J.

Stewart comes to Luther with both a theological and library background. He received the Master of Divinity degree from Regent College,Vancouver, B.C., in 1984. He served as a parish pastor from 1986 to 1993. In 1994, he received the Master of Library and Information Science from the University of Western Ontario, London, Ontario. At Princeton, Stewart supervised library staff, upgraded and initiated new technology, and coordinated and designed the library’s networked and Web-based resources.