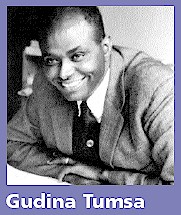 My deepest thanks to those who decided to honor Gudina Tumsa in this way. The tribute is more than fitting because the center of his faith, the center of his witness, and the center of his theology was Christ as the light of the world. His life illustrates both the profound influence a witness to that faith can have and how much that faith may cost. Gudina came to Luther Seminary in 1963. That year he and I were roommates on the third floor of Bockman Hall. He was 34. His wife and five children remained in Ethiopia. Their picture would make him so lonesome that, when he studied, he had to hide it from view. Already that first year there were suggestions that he should become the secretary of the church when he returned. But at that point he was not pleased with the idea. He wanted to return to his home, to be a pastor, and to work among the people he’d come to know as an evangelist.

Gudina had shown promise in Ethiopia, and the same was true here. Working in a language in which he was not yet completely fluent, lacking the college education that American students had, he did well in his courses, especially (during that first year) biblical studies. At 6 feet 6 inches tall, he was not only intelligent and intensely thoughtful but also exhibited a quick wit and a wonderful sense of humor. His deep piety was combined with a good deal of wisdom about human beings.

After three years at Luther, Gudina returned to Ethiopia, where he served from 1966-79 as the General Secretary of the [Lutheran] Ethiopian Evangelical Church Mekane Yesus. His accomplishments were remarkable.

For example, as the emperor was replaced by a highly nationalistic Marxist-Leninist government and the country went from feudalism to socialism…his leadership helped the church adjust to its new political situation. As part of this adjustment, he recognized the need for it to move away from its heavy dependence on overseas assistance. The divided territories of the different missions were also reflected in the church, so he worked to unite it.

His leadership also helped to form an ecumenical alliance–the Council for Cooperation of Churches in Ethiopia–and he was elected its first chairman. The Council grew out of his recognition that the churches, when faced with a government suspicious of religion and of anything other than its own influence, needed a united voice. He also led his own church to join the World Council of Churchesand the Lutheran World Federation.

His leadership kept the church focused on the gospel, on human dignity and on social justice. His was a Christ-centered theology concerned about the whole person. It reflected the best of the African mission tradition, with education, medical care, micro-development, a strong sense of community, and Christian piety all rolled into one. Beholden to no political ideology…he also saw that in Africa “politics decides who should live and who should die.”

His leadership did not falter. In 1978 he was arrested and held without charge for a month, and arrested again and held for three weeks in 1979. Responding to the request of church leaders, the government of Tanzania encouraged his release and agreed to let him live there in safety. He knew that a third arrest would be his last, but when told of the arrangement worked out with Tanzania, Gudina, with a totally uncharacteristic burst of anger, refused. He quoted [from what had become a key passage for him in prison] II Cor. 5:15: “Christ died for all that those who live should no longer live for themselves but for him who died for them and was raised again.”

For a long time after Gudina’s abduction from a street on July 28, 1979, no one knew what had happened to him. Only years later, after the regime fell, did a guard reveal that he had been killed that same night. The guard also told where the bodies of Gudina and 39 other victims had been buried. His remains were located, and a funeral was held on June 27, 1992, almost thirteen years after his execution.

In 1979, days before his death, Gudina had written these words: “As someone [Bonhoeffer] has said, when a person is called to follow Christ, that person is called to die. It means a redirection of the purpose of life, that is death to one’s own wishes and personal desires and finding the greatest satisfaction in living for and serving the one who died for us and was raised from death (II Corinthians 5:13, 14).” He continued, “A responsible Christian does not aggravate any situation and thereby court martyrdom. …to be a Christian is not to be a hero to make history for oneself. A Christian goes as a lamb to be slaughtered only when he/she knows that this is in complete accord with the will of God who has called him to his service.” 1

1 Quoted from Gudina Tumsa, Witness and Discipleship: Leadership of the Church in Multi-Ethnic Ethiopia in a Time of Revolution (Published by the Gudina Tumsa Foundation, P.O. Box 4003, Addis Ababa, Ethiopia), pp. 11-12.