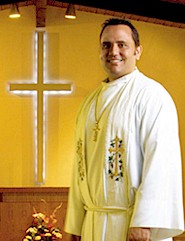 “It seemed foreign to see a man in a dress,” says Russell Lackey describing his first visit to a Lutheran church in high school. A Luther Seminary graduate, Russell is now pastor of Reformation Lutheran Church, a growing congregation in Westminster, Calif.

Unfamiliar with the church as a young person, Russell first learned about Lutheranism from a friend who invited him to church. He accepted the invitation, and despite his initial confusion about albs, his faith was quickened and he started attending church. It wasn’t long before he discerned a call to ordained ministry and found himself at Luther Seminary.

After attending seminary, Russell answered his first call, from Reformation Lutheran Church, in Westminster, Calif. “I had wondered what poor sap would take that call. I guess I was the sap! The church had only 20 people worshipping on a Sunday and had been without a pastor for seven years. When I interviewed there, I asked them why they wanted one.” The call committee replied to Russell’s query by saying: “We need help in spreading the gospel to this neighborhood.”

“When I heard that answer, I was hooked,” said Russell. With the skills and values he developed at seminary and his God-given faith, Russell has joyfully carried out the charge of the call committee.

At Luther Seminary, Russell learned that Lutheranism is about knowing that Christ died on the cross, that the Bible is the Word of God, and that we have been freed by Christ to love our neighbor. Having emulated Luther Seminary faculty members in engaging not only Bible texts but also the world at large, Russell knocked on doors in the church’s community.

During his canvassing, Russell quickly found that his tiny congregation was unknown by even its closest neighbors. “I would introduce myself and the church,” says Russell. “The people at home would ask where we were. The church was only eight doors away.” Influenced by his Luther Seminary mentors, Russell was constantly asking: “How does the neighborhood perceive us? What are its needs? How can we meet these needs while remaining faithful to the gospel?”

Making the change from a church that was barely known to one that is alive with activity meant more than just knocking on doors. Where once the appearance of Reformation Lutheran Church was one of a “closed” building, Russell made sure that cars were parked in front; the community was invited to church activities like volleyball games on Sundays and coffee and treats on Halloween. Above all, a personal welcome was made to all visitors, regardless of whether they came to seek spiritual guidance or they simply came to vote because the church was their polling place.

Russell’s dedication has opened the gates to a flood of growth. The church now has over 160 regular Sunday attendees and continues to grow. “I just baptized five high school students,” says Russell proudly. “They asked all sorts of questions.” He laughs. “One of them was why the pastor wears a dress. It’s come full circle.”