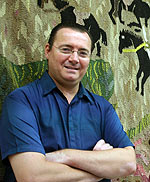 While God has shown up in many different ways over the course of Jannie Swart’s life, he has always known that God is present and working miracles in the world—a fact he was especially aware of as he experienced firsthand the transition from apartheid to democracy in South Africa.

Swart, a Ph.D. student in Congregational Mission and Leadership, belongs to the Dutch Reformed Church in South Africa. The church mainly consists of white, Afrikaans-speaking people, and for many years was known as the “church of apartheid,” as it theologically justified the legal, racial segregation under the apartheid system.

“I remember church when I was a child. Now it is truly different,” says Swart, 46.

Apartheid was legally dismantled during the early 1990s, leading the church to confess and reconcile the sin of apartheid. In the midst of these changes, Swart accepted his first call as a minister in the Dutch Reformed Church.

Four years later he was called as lead pastor at Fountainebleau Community Church in Johannesburg, South Africa. Home to more than 5,000 members, Fountainebleau was almost exclusive to white, Afrikaans-speaking people. However, during Swart’s leadership term and under the guidance of the church board, they worked to transform their homogeneous congregation into a multilingual and multicultural ministry.

While the change was radical, most members were willing to move forward. “We did lose some people because of it. Others joined. More than I expected were willing to take the next step,” says Swart. “The entire society was going through this transformation.”

Swart was a life-changing presence for the congregation, leading by humble example. “Jannie Swart has lived a parable of transformation and reconciliation in his life and leadership,” says Dwight Zscheile, assistant professor of Congregational Mission and Leadership. “As an inheritor of the legacy of apartheid, he fought against it at great personal cost. He went on to lead one of South Africa’s largest congregations through a dramatic process of racial reconciliation into mission.”

Change came in simple and practical ways. Fountainebleau began conducting worship in multiple languages: Afrikaans, English and indigenous African languages Zulu and Sotho—an important change in a country that has 11 official languages. The church also filled leadership and staff positions with people from other languages and cultural groups. The changes required many sacrifices and adjustments from both existing members and those who didn’t speak Afrikaans or were not white. This led to some of the congregation’s best learning moments. “This was not a situation in which we had any ready-made recipes on how to do it,” acknowledges Swart. “It was more like a journey of discovery through trial and error than an execution of a well-planned strategic process.”

Perhaps most notably, Fountainebleau intentionally went out into the community to form new relationships. It entered into partnerships with business and non-governmental organizations to create jobs for black women from disadvantaged communities. This was an important outreach as poverty and unemployment are major issues in South Africa. The women were provided materials and training to learn to sew and sell various products.

“These were fairly unskilled people so we focused on teaching them new skills and how to market their products,” says Swart. “In some cases these jobs helped the women sustain an entire family.”

Knowing his limitations as a white, Afrikaans-speaking male working to lead the church into a new era, Swart left Fountainebleau in 2005 and entered the CML program at Luther Seminary the next year.

Already experienced in mission development, Swart says, “(The missional conversation) helped my congregation understand what is at stake for a church that wants to participate in what God is up to in their community. I chose to do my Ph.D. at Luther because the CML program brings together all the pieces that I found to be of crucial importance for leadership in missional congregations like Fountainebleau. The last few years have been a rich learning experience, helping me reflect theologically on what I have already encountered.”

Swart also helped his classmates and professors bring the pieces together. Says Zscheile, “He is a remarkable theologian who has taught many of us here at Luther about the concrete practices and possibilities of missional leadership in a context even more challenging than our own.”