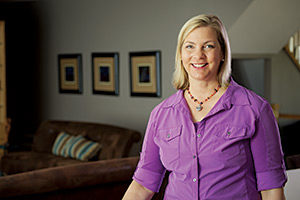 This preacher knows her way around a sports metaphor.

After playing basketball, working as a sports commentator and leading her namesake basketball camps for more than 35 years, Janet Karvonen-Montgomery, Master of Divinity Intern, can bring deep understanding to any sermon athlete analogy.

Karvonen-Montgomery’s public persona began as an allstar basketball player from New York Mills High School, where she led the team to three consecutive state championships and broke statewide records as the highest-scoring player in boys’ and girls’ basketball.

Since concluding her high-profile high school and college basketball playing career, she has built a prestigious personal career in investigative and sports reporting, and developed and grown a basketball camp program, all while being deeply committed to her husband and four children.

“Nearly everything I have gone through in my life has prepared me for ministry,” Karvonen-Montgomery said of the ways her experiences have brought her to this point in training for Christian public leadership. “Public speaking, starting a business and teaching at basketball camp have all helped me learn skills over the years.”

As a committed wife, mother and member of Lutheran congregations in the Twin Cities, Karvonen-Montgomery grew in her faith and sense of call toward congregational leadership.

These contexts for faith helped bring perspective
to her background and career as an athlete,
which sometimes otherwise fostered different
senses of identity in her personal development.

That grateful life has formed in Karvonen-Montgomery a continued generosity that she and her husband have offered to Luther Seminary, as longtime donors and now as members of the campus community.

“Campus life has enriched me a great deal, because I have chosen to invest in relationships,” Karvonen-Montgomery said. “I have helped people in small ways and people have helped me along the way too.”

That help has taken the form of purchasing textbooks for fellow students and making anonymous donations to students’ food and school accounts.

As Karvonen-Montgomery steps forward into her Twin Cities-based internship and ongoing seminary education, she vows to continue commitments to leadership and development in this new professional direction. “I hope to support and encourage others in learning how God has blessed them to be a blessing to others,” she said.