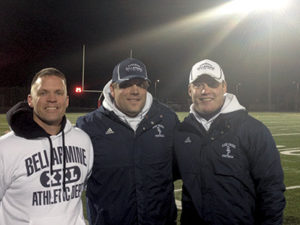 The last time we checked in with Dan Shaw, ’02, he was serving as a U.S. Marine chaplain at Al Asad air base in western Iraq. Now, nearly a decade later, Shaw is back on U.S. soil, pastoring Emmanuel Lutheran in Tacoma, Wash., and serving as a chaplain with a reserve Marine unit. Though he’s geographically thousands of miles away, he approaches ministry in remarkably similar ways.

“Here in Tacoma, 70 percent of the area is unchurched,” says Shaw, a husband and father of three. “But the vast majority are not hostile to Christianity; it’s just kind of irrelevant. It’s the same way in the military.”

In seminary, he was taught that people wouldn’t listen to a pastor who didn’t first establish a relationship with them; show them how much they were cared for. Shaw’s experience, though, has taught him that it’s sometimes the opposite.

“This is not like the book of Acts, where no one has heard of Jesus. They have a filter on Christianity. The work out here is to bust up those filters before I can talk to them about the gospel. Here, you have to have credibility with them before they’ll talk to you.”

The ability and willingness to flip the rules of pastoral procedure on their ear has served as a ministry survival tool for Shaw. When he was called into active duty with his reserve unit a few years after ordination, he didn’t land in Iraq and get handed the reigns of chaplaincy by another pastor. It was, by definition, a church plant.

“That ministry was beyond awesome. But if we’d have done your typical cultural Lutheran thing, it would have been me and two other guys there at church on Sunday,” Shaw says. “I found a couple of Jesus guys excited about doing church and we grabbed whatever supplies we could get.”

This “straight up from scratch” ministry didn’t look like anyone’s definition of typical church, he says. All manner of denominations, as well as the unchurched, were represented. People gave testimonies—a very un-Lutheran thing. There was a gospel choir made up of mostly African-American Southern Baptists. When a parishioner from Shaw’s Kent, Wash., church sent, of all things, hundreds of cigars to the base, Shaw, a non-smoker, started Holy Smokes. The wildly successful gathering of Marines smoking cigars and reading their Bibles even led to a baptism. But Shaw’s theology, he says, was “straight up out of the Book of Concord.”

“Why should we have any other barriers than the gospel message itself?” Shaw asks. “You’re a sinner. You need saving. That’s the only barrier we want.”

That means removing the formality of traditional Lutheran church if that’s what Marines in Iraq—or parishioners in Tacoma—need.

“If we were starting a church in Saudi Arabia, a more ceremonial and formal culture, then maybe our church would look more formal and ceremonial,” he says. “But out here (in Tacoma) or with the Marines, they don’t know about that and they don’t care. So how do we get the gospel to them without compromising the gospel?

“These men were endangering their lives every day. I wanted them to go into those environments with the power and the resurrection and the son of God in their hearts.”

One weekend a month, Shaw fulfills his chaplaincy duties. He spends the time with Marines who are taking two days to do qualifying tests that would normally take a month. The schedule is full, and always fluid. So Shaw fits in ministry where he can, scheduling a church service if time allows.

He spends the rest of the time in conversation and ministry with individuals and groups of Marines.

Shaw is also a high school football coach, a position which affords him the ability to do ministry with kids who need the gospel and who may listen to him more than other adults in their lives. Regardless of audience, Shaw approaches it all as one big job: telling people about God. And though his fellow Marines, parishioners and football players aren’t in physical battle, Shaw always has to be ready to be in active contextual ministry—a skill he didn’t truly learn until he was on the battlefield.

“That deployment I went on completely reshaped how I look at pastoral ministry in a church,” Shaw says. “I went on internship in seminary, but it wasn’t until I had been a pastor for five years and over in Iraq that I really got to apply what I believed. That has been my guiding light in ministry. The best experience I’ve had was there. That’s when I learned what it actually means to be a pastor in the true, biblical sense. It’s super powerful, even right now.”

Read about Shaw’s 2007 deployment to Iraq at www.luthersem.edu/story/dan08.