When Nathan Roberts, ’12, and Michael Kimpur first met as college students in 2006, it seemed highly unlikely that they would become fast friends, let alone that their friendship would one day expand into a thriving ministry and school located in Kapenguria, Kenya, as well as form the basis for a book that chronicles their lives.

The unlikely nature of that friendship starts with their backgrounds.

Roberts was raised in the affluent, primarily white suburb of Wayzata, Minn., attending a Missouri Synod Lutheran Church school across from the mansions of Lake Minnetonka. Kimpur grew up in a war-torn nomadic village in Kenya, working as a herd boy for the nomadic Pokot tribe.

While Roberts spent his childhood attending church functions in safety and tranquility as a child of privilege, Kimpur spent his days guarding cattle from warring tribesmen in the Rift Valley desert. After his cattle were stolen, the 8-year-old Kimpur walked 150 miles to a World Visions feeding camp, the start of a journey that would eventually give him the opportunity to attend school in Minnesota and then, in turn, travel back to Kenya once again.

After graduating from Bethel University with a Master of Arts in organizational leadership, Kimpur returned to Kenya in 2007. Discouraged by the poverty and violence he found there, he formed the nonprofit Daylight Center and School in 2008 to serve children who, like him, have been affected by the tribal violence in their villages. He asked his friend Roberts to help him get the school off the ground.

The story of Roberts’ and Kimpur’s bond and of the school that grew out of that friendship is detailed in “Poor Millionaires: The Village Boy Who Walked to the Western World and the American Boy Who Followed Him Home.”

In the book, the co-authors describe their early but highly divergent lives, their eventual meeting at Bethel University, and the joint efforts that led to the founding of Daylight.

Today, Roberts, who graduated from Luther Seminary with a Master of Divinity, resides in Minnesota and serves as the children and family ministries director at First Lutheran Church of Columbia Heights. He remains a volunteer staff member for Daylight, coordinating U.S.-based fundraising for the school, and travels there for three weeks each year. Kimpur serves as the director of Daylight in Kenya.

“[In the past five years,] we’ve built two dormitories and we now also have a K-8 school,” Roberts says of the developments since Story last spoke with the two men. “This year, we’re building a clinic. We now have 12 acres of land; we have 100 kids in the dorms and 400 kids in the program, and we also have a day program with 100 kids in Michael’s home village. Every year we’ve built a new set of classrooms. We have a partnership with a Baptist church in Rochester and every year they go over to Kenya and build an 80-by-20-foot classroom or dormitory.”

With the success of Daylight, Roberts says that the challenges involved with conducting an on-the-ground ministry and educational effort in Kenya have evolved.

“It’s a growing ministry and in a lot of ways, we’ve been really blessed,” Roberts says. “We’ve had exponential growth in our first few years and it’s really starting to get big now. We had a $219,000 budget last year, and we have 25 staff people [there], but one of the things we really want is to have longterm staff. As teachers wait to get a government job, they spend a couple of years at Daylight, get a great reference and then move on. And we’ve realized that really can take a toll on our kids, to have temporary relationships like that. A lot of our kids have lost their parents, and the teachers take on the role of being almost like aunts and uncles. We’re really hoping to get to the point where we can offer competitive wages, to keep up that discipleship that starts between these kids and their teachers.”

Although Daylight serves a group of children who have often seen both immeasurable suffering and been orphaned by fighting in the region, Roberts says that the students have gone on to thrive at the school.

“We really infuse the gospel principles of loving your neighbor, and overcoming things like tribalism, which is this notion that people from a different region or different tribe are less than you or are not part of the real Kenya,” he says. “We really are assertive about overcoming those biases in our children. And we are actually one of the top performing schools in our area. There are about 150 schools in our district and ours is the third-ranking school.”

“Poor Millionaires” was published in April 2015. Roberts says the book was a way to document his and Kimpur’s story, and to share the lessons they’ve learned with a larger audience, including the children who attend Daylight.

“The book came about through just telling our stories to friends and family,” Roberts says. “A lot of people would ask, ‘How did you ever start a school in Kenya?!’ That was part of it, but another big part of it was that we wanted to have a resource for the kids at Daylight to hear their own story and to learn that this has come about because of Michael’s commitment to children and not him trying to get rich and famous. There are only a handful of people in his tribe who have the level of education that he does, and he’s had a lot of opportunities to pursue business or big government positions, but he’s decided to reach down instead of reach up.”

Roberts says the idea of him and Kimpur writing alternate chapters in the book was a conscious decision, to show their stories from both perspectives, and to also explain how they came to work together to start Daylight.

“My story may be a window into learning more about Michael’s story, especially for people in the U.S., although Michael’s friends say that his story helped them understand this crazy white guy,” Roberts say with a chuckle. “Our writing it together really helped people from both sides since the book goes back and forth. There are a lot of striking similarities for us: For instance, we both grew up ‘churching it up.’ I grew up in a little Missouri Synod Lutheran school, so I was in church every day, and Michael was raised by missionaries. Even though we both had very different contexts, we were drinking from the same well, spiritually.”

Today, Roberts is pursuing pastoral work closer to home, in addition to his volunteer duties at Daylight. He says his work at First Lutheran in Columbia Heights has in many ways been informed by his experiences working in Kenya.

“First Lutheran is in a first-ring suburb of Minneapolis, and it is kind of like a small town in the middle of the Cities,” Roberts says. “It’s an interesting place because the demographics have really changed over the last 20 years. It’s moved from being sort of a middle-class, working-class, Euro-American neighborhood to being a real multicultural neighborhood. Our local school is predominantly minority kids, Latino and African-American.

“A lot of [our success here] was really in applying some of the things I learned through Daylight,” Roberts says. “In Kenya, education is a real immediate need. So through meeting that immediate need with school, we have an opportunity to form young leaders as they’re being educated. I don’t know that the kids [in our area] say to themselves, ‘I want to spend my afternoons at church!’ Instead, what they’re thinking is, ‘You know what would be awesome? To play some basketball and get something to eat in the air conditioning!’ Since the church had this gym that really wasn’t being used very much, we basically opened it up for a couple of hours in the afternoon and kids started coming. Now, five years later, we’ve tripled the size of our children’s ministry, and on Tuesdays and Thursdays, we have between 40 and 50 kids here. Our Tuesday and Thursday numbers match what we have on Sunday mornings now. We’ve just had this really great transformation where the kids have gone from saying ‘my afterschool program’ to saying ‘my church.’”

Through both his work with Daylight and through his other post-seminary experiences, Roberts says the main lesson he’s learned is how important it is to truly hear the needs of his community, whether that be in Kenya or Columbia Heights.

“The main takeaway I’ve learned since leaving seminary is the importance of listening well in every ministry,” he says. “In the different ministries that I’ve been a part of, I really try to find the ‘immediate needs,’ and then preach the gospel as you meet those needs.”

To learn more about Daylight, visit www.daylightcenter.org. To read an excerpt from or order a copy of “Poor Millionaires,” visit www.poormillionaires.org.

To read more about the history of the friendship and mission of Nathan Roberts and Michael Kimpur in Story, visit www.luthersem.edu/nathan11. 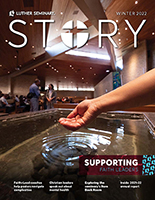