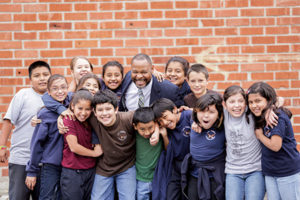 Efrem Smith has never limited his concept of Church to a location for Sunday worship. Growing up in the Minneapolis congregations of Park Avenue United Methodist and Redeemer Missionary Baptist, Smith regarded church as the anchor of his community.

Today, that vision is linking fledgling churches with established congregations, communities in need with freshly trained missionaries and prisoners with pastors. As CEO of the acclaimed urban missions organization World Impact, Smith, ’96, calls on a lifetime of training.

During college, he staffed the summer church programs he so valued as a teenage participant. After focusing on his passion for urban ministry at Luther Seminary, he applied it as pastor of The Sanctuary Covenant Church in Minneapolis, whose dramatic growth under Smith was highlighted in Story in 2009. He then served the Evangelical Covenant Church denomination on the West Coast as a conference superintendent before being called to lead World Impact in 2013.

“My years at Sanctuary were some of the best of my professional life, but more and more I realized I had a heart for the church at large and a passion for helping urban pastors and churches in under-resourced communities,” Smith says. “The opportunity at World Impact has allowed me to be a pastor to pastors, to be able to serve the broader church in the USA and beyond.”

The father of two leads a staff of 287, including 110 missionaries, and fosters relationships with 350 church partners and 6,000 donors. World Impact’s camps reach 13,000 youth annually, its schools teach another 300 and its Urban Ministry Institute is developing 2,000 students around the world to become indigenous urban leaders.

The church, Smith says, needs to be a greater force of reconciliation, compassion and justice across the world, but it can only do so by increasing ministry efforts to reach the unreached.

“A lot of my time is spent teaching and preaching the biblical case for empowerment of the poor through the church,” he says. “The urban poor should play a significant role in the transformation of their own communities through evangelism, discipleship and leadership development.”

With World Impact locations across the nation and partnerships in 15 countries, Smith will continue to find the mission fields ripe for harvest.

“When I was at Luther Seminary, I always knew I had a heart for urban ministry, so I’m fortunate all these years later to be leading an organization that’s all about equipping the church and raising up leaders for transformation in under-resourced urban communities,” Smith says.