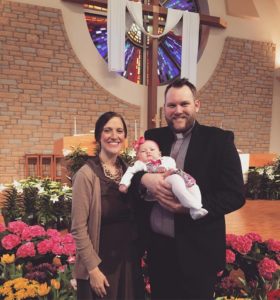 Playing music on the road. A missed call from his wife’s pastor. An afternoon of phone tag and ever-increasing wonder.

It sounds like the beginning of a Hollywood movie, but for Taylor Wilson, ’16, it was the start of something that would change his life, fortunately, in an incredibly positive way.

Luther Seminary was experimenting with a pilot program focused on contextual learning and in conversation with his synod of candidacy there was an opportunity for him to participate in a three-year embedded internship while he continued his coursework.

Not everyone is suited to work alongside their partner, but for Wilson and his wife Julie (’07, M.A.), it sounded intriguing. “We liked the idea of working together, but you never really know until you try,” he says.

While he had experience as an assisting minister at a different church, this opportunity was completely new. After a multitude of questions, conversations and interviews, he was officially Pastoral Intern Taylor at Lord of Life Lutheran Church in Maple Grove, Minn.

On average, Wilson worked 4-6 hours a day, three days a week, including at least three Sundays each month. The three-year commitment was difficult at times while balancing full-time study and part-time work, but his site was flexible and he took advantage of countless learning opportunities.

“I liked this internship because it took into account previous ministry experience. While I had plenty to learn, they didn’t pretend I had to start from the beginning,” he says. “This allowed more time to focus on the things I truly needed to learn, and with it spread out over three years, I really got to know the congregation well.”

Throughout the course of the internship, Wilson’s responsibilities evolved. Each year offered different opportunities that helped prepare him for the future.

“During the first year, it was a lot of shadowing pastors and ministry areas. My second year included me leading in various ministry areas. My third year was my internship project, where I launched a worship service in a local mobile home community,” Wilson says.

He found these experiences helped him develop both personally and professionally. He was surrounded by a network of knowledgeable, caring faith leaders that allowed him to better understand his calling and his relationship with God.

“There were seven pastors on staff, so in many ways, I wasn’t ‘needed’,” he says. “Rather than view this as a negative, I chose to learn everything possible from the talented and faithful pastors.”

Wilson became a beloved member of the church family and was provided plenty of Sunday leadership opportunities. However, he didn’t preach as much as he wanted. His solution to this was to reach out to partner congregations. He was able to preach at numerous rural and inner-city settings which helped him gain experience he craved.

“This allowed me to prepare context-particular sermons while introducing me to other types of churches,” says Wilson, recalling being able to preach on Mark while taking The Gospel According to Mark course and teaching the Catechism for confirmation while taking a Lutheran Confessions class.

His lengthy internship, dedicated study and experience preaching all prepared him to receive his first call, which came from Lutheran Church of the Good Shepherd in Moorhead, Minn.

“I was called to share in the preaching duties and pastoral care, while also implementing small groups, and serving as the mission developer for a second worship site. I also supervise the Worship and Tech employees,” he says.

Rev. Taylor Wilson isn’t alone in this new adventure. He continues to work alongside Julie, who was also called to Good Shepherd as associate in ministry/children and family ministry director.

“I feel like my experiences at Lord of Life better prepared my wife and I to serve together, and my first call has presented opportunities to share my gifts from previous ministry, while providing exciting new challenges in a growing faith community, too,” he says.