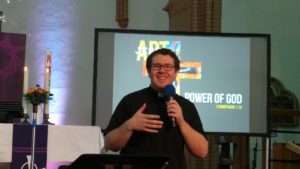 August was a month of excited uncertainty for M.Div. Student Tim Schroeder. Unlike most students, who intern close to home or in another state, Tim was setting off for an internship abroad.

Through the ELCA’s Horizon International Internship program, Schroeder is serving for one year as pastoral intern at the American Church in Berlin. The Horizons program operates out of ELCA Global Mission and works in conjunction with the ELCA Domestic Mission unit and in cooperation with the synods and seminaries of the ELCA. Like typical seminary internships, this year abroad will satisfy Schroeder’s internship requirement for his M.Div. degree.

“There’s a bit of risk in preparation to do as you go overseas,” Schroeder explained as we talked over Skype. “Here you are, packing up life, storing it away in your parents’ garage, leaving the U.S. with two suitcases and a backpack. And you wonder about all the things you might need for an internship year. How do you plan for that?”

Ultimately, he concluded, you have to let go and trust that God will provide.

Of course, Schroeder was not alone in making this transition to a new country. In July, before he set off to serve at the American Church in Berlin, he had the opportunity to participate in the ELCA’s annual Summer Missionary Conference in Chicago. There he trained in as a missionary and learned more about the ELCA’s philosophy of missions. “It’s about accompaniment,” Schroeder explained. “We’re not sent to fix anything.” He added that the accompaniment model is an excellent outlet for the skills he learned in Clinical Pastoral Education, particularly listening. In this model, he explained, you listen to the needs of other congregations in other cultures and help them figure out how to use their own unique, God-given talents to address those needs.

Schroeder also spent a few days in fellowship with the missionaries who had returned to the States for homestay, asking questions and hearing stories of their experiences.

Schroeder’s internship began in September and, despite some hardships, he is thriving in his work at the American Church in Berlin. Because it is one of the only English speaking congregations in the city, the American Church in Berlin, he described, is a very international congregation. It collects people from all over: Africa, Asia, Europe and the Americas, for all sorts of reasons: work, military placement, marriage, asylum. Some native to Berlin even attend because they find the worship experience to be more vibrant than the average Berlin church. While the congregation is closely associated with the ELCA, it promotes itself as an ecumenical international protestant church, drawing members from a wide variety of protestant traditions.

Schroeder revels in all the opportunities this multicultural church provides. Hospitality is important to the congregation. “I get to eat at an international table every single week,” he said, “which is both delicious and amazing. And you are also invited into people’s faith lives and traditions. You get to see how they practice their faith, which is often times very different than how I was raised to practice mine in northern Wisconsin!”

The English speaking congregation was founded by a group of American families in 1865. After many years of meeting in people’s homes, the church built its own building in 1903. During the World Wars, the church was shut down, and the building was destroyed by bombs in 1944. In 1945, the congregation began meeting in other church facilities on the west side of the city. Finally, in 2002, the congregation was able to move back to a newer building on the east side near its original location, where they are housed to this day.

Schroeder keeps busy in his day to day work at the American Church. The congregation views him as a pastor and expects him to fill that role, making home and hospital visits, joining prayer circles, going to committee meetings, coordinating the newsletter and, of course, preaching.

The congregation cannot afford a youth pastor, and so he also spends his time meeting with the youth group. The congregation has strong connections to Laib und Seele, an organization that salvages extra food from restaurants and grocery stores and distributes it to the needy. Often Schroeder and the youth group get together on Friday evenings to hang out after they volunteer together with Laib und Seele. In the fall, he also had opportunity to travel with the youth group to Taizé, France for the International Youth Conference.

Schroeder’s time in Berlin has been full of wonderful and diverse experiences. As the 500th anniversary of the Reformation approaches, Berlin is embracing its Lutheran heritage and so is Schroeder. The president of Germany sponsored an exhibit at a local museum about the Reformation, featuring old reformers like Luther, and new reformers like Martin Luther King Jr. and Ghandi. Schroeder was interviewed as part of the exhibit. He said, “My voice was to represent the 21st century Lutheran from the U.S. coming back to his roots in Germany to learn more about church leadership.”

“This internship program is an important opportunity for us to partner with our international churches and our missionary network,” he concluded, “This is one of the great things that comes out of the ELCA church-wide organization. One church couldn’t network like this. I encourage all seminarians to consider doing an international Horizon internship!”