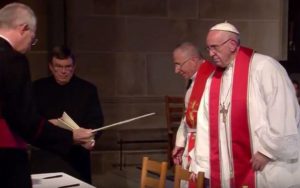 Roughly six months after playing a key role in the historic joint ecumenical commemoration of the reformation by the Lutheran World Federation (LWF) and the Catholic Church in Lund and Malmö, Sweden last October, Luther Seminary professor Dirk Lange is now prepping for a second big gathering.

In mid-May, the LWF will hold its 12th General Assembly, a legislative meeting that occurs every seven years. The LWF is a communion of the majority of Lutheran churches worldwide, and delegates come from 145 member churches across the globe.

As with the Lund event, Lange, associate dean of Graduate Theological Education, Fredrik A. Schiotz Chair of Missions and professor of worship at Luther Seminary, is again actively involved in preparing for the Reformation celebration and liturgy at the meeting as the lead event consultant.

“Namibia is a really significant place and a really important context for the LWF to meet in. It is also going to be the occasion for the LWF to commemorate and celebrate the 500th anniversary of the Reformation,” Lange says. “There will be ecumenical partners present and it will provide an opportunity to commemorate what Lutheranism has meant around the world.”

The LWF has a long history with Namibia, and the website for the event (lwfassembly.org) states, “[T]he relationship between the LWF and the Lutheran churches in Namibia is closely intertwined with the national struggle and victory against apartheid so that justice, freedom and dignity could be achieved for all Namibians. To anchor the Assembly in Namibia is to epitomize and celebrate this accompaniment made possible by the grace of God. It is also significant that the global commemoration of the Reformation is taking place in Namibia during the Assembly.”

Lange says preparing for the LWF Reformation celebration has taken a great deal of planning.

“It’s a huge event where Lutherans from around the world come together for discussions on policies, and what themes and social justice issues do we as participants in a global Lutheran communion need to focus upon for the next seven years,” Lange says.

On May 14, the LWF will celebrate the 500 years of Reformation. “There will be a grand liturgy in the Independence Stadium in Windhoek, to which all of the parishes are invited. We’re expecting 9,000 to 10,000 people. This liturgy will be several hours long – a huge celebration – including many testimonies and music from all the continents telling the story of how the Lutheran Reformation has impacted the globe,” says Lange.

After his experience with the profoundly moving Joint Commemoration event in Sweden, Lange says he hopes the LWF assembly will have a similarly satisfying outcome.

“The Lund event was really beyond our expectations,” says Lange. “It was overwhelming as the worldwide press coverage demonstrated,” says Lange. “It was global, with our Roman Catholic sisters and brothers and with all of our ecumenical partners. I think people were overwhelmed by the solemnity of the liturgy, by the deep presence of the Holy Spirit working within the praying community. In that moment that Catholics and Lutherans were able to gather together and give thanks and lament and commit together. Thanks be to God!”