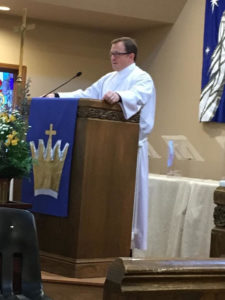 The call to ministry wasn’t something Brook Seaford resisted. “I never fought it!” he says, “I’ve always been all about it … but it took time.” Seaford began his seminary journey in the fall of 2010 and will graduate this summer. “When I started as a distance learning student I was in cohort 4,” he says, “But I think I’m going to finish up with cohort 7.” While this may be a little later than anticipated, for Seaford, it’s better late than never. Transitioning from a fifteen-year career in corporate America, Brook also has an M.B.A. and worked for a major insurance company based in Charlotte, N.C.—his hometown.

While on internship, Seaford has jumped headfirst into the role of associate pastor—preaching every other week, leading a men’s group, serving on committees and regularly taking pastoral care calls. Yet despite these busy first few months, working at Cross & Crown Lutheran Church in Matthews, N.C., a suburb of Charlotte, has only affirmed his call to ministry. “Internship has prepared me for the reality of being a pastor,” he says. “Just last week, my kids had head lice and I had bronchitis, but I still had to preach that Sunday. The past six months have taught me how to balance family life with my church work.”

An aspiring second career pastor, Seaford sees his life experiences as valuable assets for congregational ministry, though initially, as a husband and father of five—with children 13, 10, 8-year old twins and 4—the logistics were the obstacles. Knowing he couldn’t quit his job, a distance-based divinity degree was the perfect fit for Seaford. While internship was the last hurdle to graduation, Seaford and his family weren’t quite sure how they’d make it happen. “God’s fingerprints were all over the place,” he described. “Just when it was time for internship, congregational support came from everywhere—four different churches. And my department at the insurance company shut down, so I got a severance package.”

While working in corporate America isn’t exactly the same thing as leading a congregation, Seaford’s interpersonal skills are probably his strongest attributes. “Stewardship campaigns, whether they’re in business, banking or the insurance world, or at the local church, are kind of similar,” he says. “Many things from my past career are transferrable.” During internship, his personal experiences have not only helped him have empathy for what others might be going through, but they have also created a commonality and relationality between him and his congregation. Three years ago his wife became very sick and as a result lost both of her hands and a foot. “Adapting to using two prosthetic hands isn’t easy,” he says. “She was once an avid runner and Boston Marathon qualifier.” Yet Seaford humbly sees these struggles and trials as a greater means to understand and serve his congregation—to praise the Lord

“A unique challenge during internship,” he says, “has been navigating the political landscape last fall and winter, and my state in particular tends to have people on both sides of the aisle—so sensitivity was essential and my own opinions aren’t necessarily what matters. I don’t assume where people are at, but instead have coffee with them, listen to their concerns, and in the end: proclaiming the Gospel and caring for everyone is my job.”

A small church with many people: Ele Clay

When Ele Clay chose Lutheran Church of Hope for her yearlong contextual learning experience, she never imagined just how nontraditional the internship would be. Like most interns she preaches and presides, teaches confirmation and does pastoral care, yet it’s the way these ministries function, and the robust missional focus of this mega-church in West Des Moines, Iowa, that has shown her just what a church is capable of. “It’s like a small church,” Clay says, “But with a lot of people in it.”

Born in the West Indies, she first came to the United States for college. Graduating with an M.A. from Southwestern Baptist Theological Seminary in Fort Worth, Texas, and serving with Woman’s Missionary Union (WMU) in Birmingham, Ala., for six years, Clay describes this work as the critical formation of her Christ-centered ministry. Not only in shaping her voice as a woman preacher in a predominantly male-led denomination, but also in seeing the ways a missional church serves and grows.

While she’s a candidate for rostered ministry in the ELCA and the Southwestern Texas Synod, “I’m a Christian first,” Clay says. Most importantly, she feels as if her experience brings her a deep sense of ecumenism. “I have a respect for all traditions,” she says, “And particularly those that have nurtured my own faith.”

In the fall of 2013 she began classes as a distributed learning student at Luther Seminary, and was immediately drawn into the tight-knit community these online students are known for creating. “It all started in Greek,” she says—laughing. “That was my first introduction—twice a week—into this community.” Ever since, she’s remained connected with her cohort, even during internship, which often can be the busiest point in a seminarian’s career. “Oh yes!” she says. “If they don’t hear from you for awhile … they’ll track you down. There’s no hiding from cohort 7.””

Serving at Lutheran Church of Hope—or Hope, as it’s casually called—has only reaffirmed her ministerial call. While the congregation’s main campus is in West Des Moines, there are satellite sites in Ankeny, Des Moines, Johnston-Grimes and Waukee. “I’ve learned a lot by observing how such a big church functions,” Clay says, “But also by getting involved in the many ministries offered at Hope. The building never feels closed!”

“The first six months have gone by so quickly,” she says. As an intern she’s preached and presided in chapel and assisted with children’s worship, taken turns with an emergency cell phone hotline, taught confirmation class, preached at a Wildwood Hills Ranch (a retreat center for at-risk youth), provided pastoral care and made hospital visits. As a public service to the community, Hope does funerals for anyone, member or not, of which she conducted two very early in her internship.

With a focus on building local communities—rather than commuting to the main campus—Clay got involved in a new “Hope local site” in Ames, Iowa. “I was so humbled and excited,” she says, “They asked me to come and preach at their very first live worship service—Ash Wednesday.” As she moves into the second half of her internship, she says, “I really am seeing people live out what we learn from the Bible: to live lives rooted in ‘being church’ to others, as Christ wants us to be.”