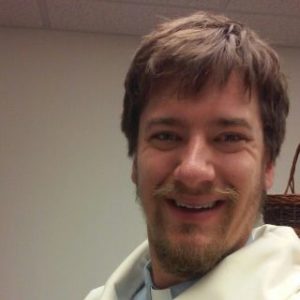 The lines of Marty Haugen’s familiar hymn came to life for Dean Safe at his internship at Zion Lutheran Church in Pelican Rapids, Minn. It was here, during his 2015-2016 internship, that Safe began a ministry of baking fresh bread for the community.

Safe explains how the project came together, “I had led a bread ministry in my teaching congregation in Grand Rapids, Minn. We had done some work with the county homeless shelter there.” When arriving in Pelican Rapids, a rural community with a very diverse population, Safe immediately noticed a difference from the rural area he had grown up in.

Safe says, “the local turkey plant employed a large Hispanic, Vietnamese and Somalian population. For being a town of 2,000 people they had just incredible diversity.” As a result of the large influx of workers the town had a long-term housing shortage and people experienced a lack of resources overall. That’s where the Pelican Rapids Food Shelf came into the picture.

At the start of his internship, Safe originally thought baking bread would be a fun side opportunity, not his main project. Then, he met with the clergy woman who runs the food shelf. Safe says, “I sat down with the food shelf coordinator because I noticed that there was a high percentage of families coming through. It was always busy and Zion Lutheran had expressed a keen interest in reaching further beyond their walls.” From their conversation, Safe learned about the lack of fresh food available. So, he asked whether or not the food shelf could use fresh bread. Safe says the coordinator told him, “I understand this much the same as you do, as Christ’s call to feed others and care for others. We would be happy to have this.” It was a recipe for a perfect partnership.

Safe says, “I went back to Zion and announced it one Sunday as an informal gathering to sort of gauge interest. We had 15 people the first time we met.” From these 15 people grew a core group of intergenerational bread bakers. Safe says, “We would meet monthly, usually the second Sunday of the month. We would start the dough and then have dinner together. We would have an education or conversation hour around food and faith or hunger awareness and justice.” Grandsons and granddaughters would come to help, and people shared what Safe calls a time of holy storytelling.

Like warm, rising dough, the bread ministry grew. Safe says, “We would bake on a Sunday afternoon and go to the food shelf on Tuesday to distribute it. Sometimes we would stay and work those hours they were open, helping to hand out food.” These experiences led to more times of sharing stories with those who came to the food pantry. Safe says about encounters between congregation members and the people at the food pantry, “God was working through those individuals.”

Soon the entire community of Pelican Rapids became aware of the Zion Lutheran bread ministry. Safe says, “We started in September, and in October or November the newspaper came out and ran a story on the bread ministry and the food shelf.” After the story appeared, Safe became known as the “bread guy at Zion” and was fondly greeted that way when he went into town.

True to Jesus’ parable about the Kingdom of Heaven being like yeast that a woman worked into dough, the bread ministry inspired other local congregations to think about ways they could start investing in the community. Safe saw God’s hand in all of this. He says, “God works in pretty powerful ways through communities like that, which I was thankful to experience.”

In fact, God is still working through this bread ministry. Zion Lutheran has continued what Safe started during his internship, giving the people of Pelican Rapids a sense of community and fresh baked bread.