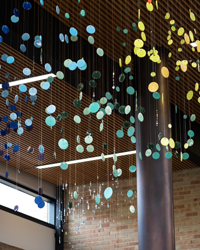 They differ in profession, life stage, location, and their connection to Luther Seminary.

But Drew Yackel ’14 M.Div. and Angelica Matthes Yackel, Margaret and Pete Rude, and Kathie and Ron Nielsen ’67 M.Div. share a passion for Luther’s mission and a firm grasp of what it takes to sustain an organization. In fact, the seminary calls them—and hundreds of others—“Sustainers” because they give monthly by automated means to Luther’s Sustaining Fund, providing more than half of the seminary’s operating revenue.

During 16 of the past 35 years, the Yackel family has included a Luther Seminary student. Drew Yackel’s father graduated in 1988, becoming a Lutheran pastor. His mother attended as a second-career distance learner for eight years; she graduated and was ordained in 2009. Soon after, Drew himself became, in his words, a “pipeline student,” going straight from college to seminary along what was once the typical path—two academic years on campus, internship, and a final year of study. He feels Luther’s academic program innovations help make it “the flagship seminary” of the Evangelical Lutheran Church in America. “One reason I want to give to Luther,” he said, “is because they’re trying new things and experimenting, not just to be ‘cool,’ but for the right reasons, in bold and faithful ways.”

Drew, who now lives in Cannon Falls, Minnesota, and serves Urland Lutheran Church, said he feels fortunate to be in a position to give to Luther Seminary. “It’s not just a way to give back, but to pay it forward. Luther Seminary is going to be key for the future of the church, partly due to the plurality of its leaders. We need a place like Luther, where there’s innovative thinking going on from top scholars and faithful teachers who really care about our witness to the gospel and passing that on to the next generation.”

Margaret and Pete Rude of Redding, California, are connected to Luther Seminary through both “the next generation” and the one before theirs. Margaret’s father graduated from Luther in 1959, and this spring, 60 years later, so did their son Erik Rude ‘19 M.Div. “We support the church and other Christian organizations, but we didn’t think about the seminary until our son went there,” said Pete, a civil engineer. “Then we became aware of Luther’s financial need and of the critical shortage of pastors.”

Pete believes the cost of attending seminary contributes to the shortage.

Recalling how the church paid much of the cost for his father-in-law to attend seminary and recognizing how things have changed since that time, Pete told himself, “Put your money where your mouth is,” and with his wife decided to give on a continuous basis.

Margaret is principal and director of a charter school she founded 20 years ago. Her experience as an educator undergirds her passion to support Luther with sustaining gifts. “I understand budgeting; I understand planning; I understand long-term goal setting and measuring progress on those goals—all things I’m sure the seminary does, too,” she said.

Margaret also sees their automated giving from another angle: “How do you make Christ real? That’s part of the mission and heart of the Lutheran church—how do we make it relevant so [people] want to have a relationship with Jesus? That’s long-term planning. The seminary has to be able to forecast revenue for three to five years. The only way to do that is to have sustaining givers. That allows the seminary to look at long-term impact for training the next generation [to make] Christ real to people.”

The seminary is so much a part of Ron and Kathie Nielsen’s lives that they moved to the Twin Cities after his retirement from parish and outdoor ministry, and hers from a special education career. Relocating to Maplewood, Minnesota, allowed them to be closer to seminary friends and able to attend convocations, workshops, and other on-campus events easily. They even held their 50th anniversary celebration at the seminary—fitting because the Nielsens married while Ron was a Luther student.

“I love the church,” Ron said, “and the seminary is one of the tools that sustains the church. If we didn’t have the seminary, we wouldn’t have pastors.”

Kathie affirms the other ministries of the seminary, too. “We’ve had speakers from Luther at church [events]. I attended several classes through the Lay School of Theology, and I loved it,” she said.

The Nielsens have been sending annual or semiannual gifts to Luther for quite a few years. “But it’s easy to put off,” Ron admitted. “So we went to monthly and automatic. From years of camping ministry, which is very development-related, I know it’s easier to raise money for a crisis. Special projects are needed, but without regular general operating funds, we’d be in trouble. It’s so important to take care of what we’ve got.”

In all, almost 10% of Luther donors are Sustainers. Their unrestricted gifts fund day-to-day operations, faculty salaries, scholarships, and more.

“Sustained giving is all about commitment,” Drew Yackel said. “I see Luther Seminary as committed to its mission, so I want to be part of that group of faithful supporters and sustain the life of the institution. The mechanics of sustained giving just make it easier. We can ‘set it and forget it,’ so giving doesn’t waver with the ups and downs of personal finance.”

Automated giving is easily set up using a bank account or credit card and can be stopped anytime by contacting the seminary.

To learn more about becoming a Sustainer, visit luthersem.edu/give.