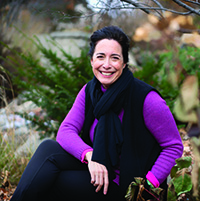 From her first foray into artmaking—a book about a porcupine that she wrote and illustrated at the age of 4—to the present moment as a second- (or is it third- or fourth-?) career seminarian, she has been captivated by painting, drawing, and writing.

Still, it was only recently that she began to understand that art was more than a profession or even a vocation; it was a spiritual practice, a way of entering into conversation with and listening to God. What’s more, she began to discern that God was calling her to use her gifts as an artist to form and strengthen Christian communities.

Gelerter was raised in rural Connecticut. When she was 12, her parents drove her into New York City to see a Vincent van Gogh exhibit at the Metropolitan Museum of Art. “I connect this experience with my call,” Gelerter said, remembering the way she was captivated by the thick brushwork and finely detailed ink drawings of her then-favorite painter.

Afterward, the family was enjoying lunch at a nearby pizza parlor when she saw a man come into the restaurant and pick through the garbage.

Gelerter recalled the story: “I asked my mom, ‘Why is  that  man  eating out of the garbage?’ Mom replied,

‘Because he’s hungry.’ And I thought, ‘How could a whole restaurant of people look right through him like he’s not there? Why isn’t someone offering him something to eat?’”

That image remained with her for years, and it ultimately fueled her sense of vocation. “They went together,” she said, “the painting and the call to people at the margins.”

Gelerter was trained as a studio painter at Elmira College, a small liberal arts school in upstate New York, Reading University in England, and Syracuse University, where she received a Master of Fine Arts degree in painting. During that time, she became an instructor and developed a course on painting and drawing for students who were not majoring in art.

“To be honest, I liked teaching non- majors better than majors because of the variety of perspectives and experience levels,” Gelerter said. “What struck me is that even if you’ve never painted before, if you’re encouraged and given the opportunity, progress happens. Work comes out of it. It’s an amazing and surprising gift to hear students say, ‘Look at what I’ve made!’”

She took this experience with her to Dunedin, Florida,  where she opened a small working studio and gallery. In addition to showcasing her own paintings, she featured work from local artists. “A community began to build up around the gallery,” she said.

Her experiences led her to seek other ways of sharing art. She began volunteering at a soup kitchen with people experiencing homelessness and brought photocopy paper, pencils, and markers to place on the dining tables.

“I put the supplies on the tables discreetly, not even sure what would happen, but so many people participated,” Gelerter said. “I still have the drawings. One man with multiple personality disorder made an abstract drawing and had a conversation about it with others at the table. Another person created a landscape. I saw the same wondering, surprise, and delight happening at these tables that happened in my studio. Art gave people an opportunity to express their thoughts and feelings in community with one another.”

At the time, Gelerter was not a churchgoer, yet the experience touched her in a way that she knew was somehow connected to God. Through the community she met at the soup kitchen, she began to participate in a local congregation. A few weeks later she was baptized, and it wasn’t long before she discerned a call to Word and Sacrament ministry.

“I kind of thought I’d have to put the artist away,” Gelerter said, admitting that she left all her paintings and supplies in storage when she moved across the country to attend Luther Seminary in 2017. Yet God wouldn’t let her creativity stay dormant for long. In Summer 2019, she took a course on the Book of Job, and Gelerter asked Elva B. Lovell Chair of Old Testament Kathryn Schifferdecker, the professor teaching the course, if she could paint for the required final project. Schifferdecker agreed.

“For the first time I saw how my creative process has always been a way of connecting with the Holy Spirit,” she said. “I hadn’t been able to see how I might reconcile being a pastor with being a painter, but this project shifted my outlook. When God calls us, God calls all of us.”

After that first painting of Job, the floodgates opened; art began to pour out of her, often in response to biblical passages. “Art is a way the Holy Spirit can open Scripture for people,” she said. “Like Lectio Divina and meditation, it is an expression of silence and prayer.”

Gelerter began to consider how others might benefit from art as a spiritual practice. She raised the idea in a congregation she was supporting through her studies. The church loved her idea and hosted an intergenerational art event after worship one Sunday. Although the congregational culture didn’t usually involve much lingering after services, more than 70 people stayed for the experience, and 53 paintings emerged out of it.

“They’re still doing it quarterly,” Gelerter added. “Now it’s still-life drawing, wood and soap carving, and other media. Members of the congregation are coming out of the woodwork to take turns leading, and it’s not the same 10% who tend to run everything in the church. It’s engaging new and different people.”

Gelerter is convinced that art as a spiritual practice is a way of reaching people who might not otherwise be interested in or connected to church.

In Gelerter’s words, “What if we just invited people and gave them a space to show up? A space where they could experience being surrounded by Christian community? A space to feel welcome? A space to give voice to what’s going on in their lives, the joy and the struggles and the grief and the searching? I trust that the Holy Spirit works through that.”

Even more, Gelerter sees value in helping people unlock creative potential they didn’t know they had. “There’s a real pride and joy that comes from realizing, ‘Maybe there’s something more to me that I don’t even know about, a sort of hidden reserve.’ If we can build a bridge and come together, wonder together, have conversations in a constructive, supportive way, we’ll be ministering to people effectively.”

After all, she added with a smile, “God is a God who is ever creating, and the creative process is one in which all are invited to participate.”

Interested in experimenting with art as a spiritual practice in your congregation?