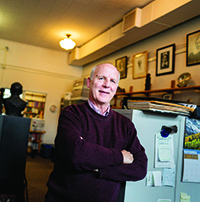 He is the Lloyd and Annelotte Svendsbye Professor of the History of Christianity at Luther Seminary and serves as editor of Word & World and the Journal of the Lutheran Historical Conference. Since his ordination in the ELCA in 1988, he has worked with local congregations and Lutheran higher education in a multitude of roles.

Throughout his career, he has written the book— several, actually—on the history of Lutheranism, from Martin Luther and Scandinavian movements of the past two centuries to the development of Lutheran faith and practice in North America until present day. Now, on the occasion of the seminary’s 150th anniversary, Granquist has published “A History of Luther Seminary: 1869–2019” (December 2019, Fortress Press).

Is it ambitious to catalog the 150-year narrative of contentions between Lutheran denominations, the particulars of their theological convictions, and the personalities of institutional leaders navigating eras of social change? Without question. Is Granquist uniquely capable of weaving the threads of such a history of Lutheran higher education? Undoubtedly.

“Much of the primary source material had not been used in this focused way prior to his research,” said Paul Daniels, head of arts and archives at Luther Seminary. A curator as well as an archivist for the nine synods of ELCA Region 3, Daniels recognizes the scope and value of composing such a  volume.  “With this book, Dr. Granquist has made an important contribution to the study of American Lutheranism and, specifically, to the understanding of one of its leading theological schools. He has created a  much-needed  comprehensive  narrative  of this 150-year-old school, using large amounts of textual and visual materials from the seminary and regional archive collections.”

While this book probes the past events that have led to the seminary’s present-day incarnation, it also provides a throughline of the institution’s character and trajectory into the future.

“Luther Seminary has a long tradition of innovation,” said President Robin Steinke. “In every era when we’ve confronted cultural and institutional changes, the community has learned to adapt. This has always required being gospel-focused, student-centered, and open to the leadership of the Holy Spirit in times of transition.”

Selected from Granquist’s book, here is an excerpt that describes seminary life and adaptations in such a time of significant transitions.

The educational life of a seminarian in the 1930s was generally laid out in fairly rigid schedule. Students were sent to Luther Seminary with the endorsement of their local pastor and with the approval of the faculty. … Students paid no tuition, as their education was provided by the NLCA [Norwegian Lutheran Church in America], but they were responsible for the costs of room and board and other miscellaneous fees. During these hard economic times, students would stay in seminary as long as their money held out, and as long as they could find work to support themselves, usually summer employment in congregations if they could find it. Some students had to withdraw for periods of time because their funds ran out. Life in the Main building was rather spartan, and students tried to stretch their limited resources as best they could.

… It was quite literally a brotherhood. All the students were men, virtually all unmarried, and they slept and ate, studied, and went to class in a single building.

Married students were a rarity, usually older men who were going to seminary after working out in the world for a number of years. Formal engagements to be married were frowned upon, but breaking an engagement was cause for dismissal from the seminary. Some seminarians had “understandings” with young women about future marriage plans but generally kept these arrangements private. Toward the end of their educational career, students were expected to find a call, graduate, and find a wife in rather short order, for it was expected that a pastor would have a wife who would be an (unpaid) extension of his congregational ministry.

A major change to the rhythms of seminary life came during the depths of the Depression, in the middle of the 1930s: the addition of an internship year between the second and last year of coursework. … The pedagogical explanation for this change was that it was necessary for students, most of whom had come to seminary directly from college, to have a sustained experience working as a pastor in a congregation. But there was another reason for this change at this time: in the depths of the Great Depression, many congregations were without pastors (and the funds to pay them), and too many graduating seminarians could not find a call. This internship year provided pastoral leadership to vacant congregations and stretched out the seminary process, thus reducing the number of students who graduated without call. In 1934, the NLCA annual convention voted to require this change in the seminary process, and the internship requirement was instituted for the 1935–36 academic year.

… From 1930 to 1945, the situation at Luther Seminary had been anything but normal, with the economic difficulties of the Great Depression followed by the wartime issues of 1941–1945. During this generation in seminary life, challenges pushed the seminary and its people to adapt. People had put many parts of their lives on hold “for the duration.” At the end of the war in 1945, there was a strong desire in the country for things to return to normal. But the postwar era brought with it a whole new set of challenges and opportunities. Normal, it seems, would have to wait a bit longer.

One of the biggest challenges for the seminary was the flood of new students who wanted to enter theological study after World War II. Enrollment in the seminary had dipped during the middle of the Depression but had rebounded to around 150 students on the eve of World War II. By the end of [T.F.] Gullixson’s presidency in 1954, the total enrollment had surged to around four hundred students a year. Although these numbers were an issue unto themselves, the composition of the student body was also changing. Many of the new students were older—men who had served in the armed forces during the war or who had worked in defense plants. Not only were they older, but many of them were married or soon to be married. The predominant “bachelor days” of the seminary were now a thing of the past. Housing for married students and even families was now a pressing issue. These men were often very serious students and in quite a rush to get through seminary and out into the parishes.

Pastors were also very much needed in the parishes of the church, renamed the Evangelical Lutheran Church (ELC) in 1946. Dropping the word Norwegian from the name of the denomination was a bit controversial and had to be finessed by church leaders, but it represented the truth: this was no longer an immigrant or even a hyphenated denomination but a wholly American church body in the Lutheran tradition. And it was an expanding denomination, growing rapidly and moving outside of its traditional upper-midwestern territory. After the war Americans were on the move, with great numbers moving to the southern and western states or leaving cities for fast-growing new suburban areas. Like many of its Lutheran denominational partners, the ELC was founding mission congregations in these new areas as fast as they could. Together, the American Lutheran denominations were establishing hundreds of new congregations to serve the new “baby boom” (1946–1964), and existing congregations grew as well. There was an incredible need for pastors to serve these congregations and to replace the older generation of pastors, many of whom had extended their ministries because of the Depression and war and now needed to retire.

We again stand in the midst of cultural churnings that affect both society and seminary: international conflicts and migration, decline in religious affiliation, political instability, economic fluctuation, and an impending shortage in Christian public leaders equipped to lead local congregations. As in the past, faithful innovation requires allegiance to anchored tradition as well as active participation in the mission of the church as it unfolds around the world.

“As we enter a new era in the life of Luther Seminary, as well as the broader church,” said Steinke, “we’ll draw on our legacy of gospel-centered innovative leadership to ground our work and look forward with hope to what God has in store for us!”

Get the Book
“A History of Luther Seminary: 1869–2019” is available from bookstores and online retailers beginning December 17, 2019.