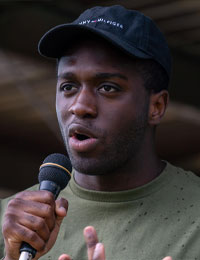 Pastors learn to get comfortable being—and inviting others to be—uncomfortable for the sake of building stronger communities of faith, belonging, and justice

On a day set aside for difficult conversation, rain poured down.

But the diverse crowd that gathered to hear the words stayed.

The clouds darkened, and a sound system intended to amplify the speakers’ voices shorted out not once, but twice.

But still the crowd stayed.

Then the rain stopped, the clouds parted, and a rainbow stretched across the sky.

And nobody would question Bonnie Wilcox ’97 M.Div., senior pastor at First Lutheran Church, who witnessed something more than refracting light.

Nobody would doubt that those in the crowd saw God that day.

A place to hear

It was not quite a month after the death of George Floyd, and Wilcox and her leadership team at First Lutheran, located in the Minneapolis suburb of Columbia Heights, Minnesota, continued to brainstorm about how the church community could best respond to the pain and unrest within the Twin Cities.

Protests rippled throughout the metro area—and around the world—calling for justice after Floyd, a Black man, was killed by police on May 25. At the Minneapolis intersection where the encounter occurred, a collection of memorials rose up to remember Floyd and the many Black lives lost at the hands of police.

In Columbia Heights, about seven miles north of the Longfellow neighborhood that was the epicenter of the unrest, Wilcox said the church community had a strong desire to respond to what was happening. The primarily white congregation wanted to do the right thing, though they weren’t sure where to begin.

To get some direction, Wilcox turned to community partners. “We talked to Black leaders in the Columbia Heights community and asked, ‘What do you need?’” Wilcox said. “They said, ‘We don’t need anger; we need a place where people can hear our stories.’”

So on the night of June 23, more than 100 people from the church and the Columbia Heights area came to hear Black community members share stories of how they had been discriminated against as immigrants, how racial slurs had been hurled at them and their children, how they feared for the safety of their children, and how they experience—and try to forgive—aggressions large and small.

“The night of the rally, we thought we could invite our white neighbors in to learn how to have better conversations with people. The response was overwhelming,” Wilcox said.

The event wasn’t the first conversation church leadership had with members of the community, and it would be far from their last.

“We have to work at this,” she said. “We can’t just say ‘It’s four months now, so I guess we’re done.’ We have to acknowledge that long view of God working to do good in the world, despite all that humans are doing to block it.”

Putting in the work

Nathan Roberts ’12 M.Div., First Lutheran’s director of community engagement, said for many white people, conversations about race and racism are hard. No one wants to say the wrong thing, so they just don’t say anything. Then a tragedy like Floyd’s murder occurs, he said, and well-meaning people, often faith leaders, want to get involved but they don’t know how.

Roberts said it’s challenging for pastors and faith leaders who often are more comfortable counseling a family through the death of a loved one than they are talking about race. They face their own insecurity of saying or doing the wrong thing, being vulnerable and having to admit they aren’t well-versed on race, and realizing they can’t make others immediately comfortable. “Having these conversation takes trust, and that trust takes a long time to build,” Roberts said.

Roberts, Wilcox, and a racially diverse team of First Lutheran leaders recognized the need to provide opportunities for their congregants to be necessarily but safely uncomfortable. Several years ago they started what the church calls storytelling nights, which feature members of the community speaking about their life experiences to the congregation.

In the past four years since the storytelling nights began, the church has welcomed Asian American, Black, Latinx, and Somali community members for what have become open and frank discussions that have revealed what they experience over the course of a routine day—from bigotry and racism to language barriers and navigating their children’s education systems.

The church also opened an after-school care program for neighborhood families that offers a safe, reliable, affordable place for kids to go in the afternoons, and they hired local Black moms to help run it.

Those years of conversations, of programming for demonstrated needs of the community, of humbling themselves to the needs of others hasn’t been easy—and they haven’t always gotten it right.

Roberts is more direct: “There’s a 100% chance you’re going to make a mistake in talking about race—you have to get past that.”

Both Roberts and Wilcox said it’s imperative that pastors and other faith leaders do the work needed to be able to tackle the difficult and ongoing conversations of race and racism. The work, Roberts said, starts within.

“Before you start trying to teach anybody else, you need to start going to restaurants owned by Black people and people of color. Go to conferences where Black people are the expert speakers,” he said. “Practice being the only white person in the room. Practice conversations about race with your friends. Practice being uncomfortable.”

The journey isn’t meant to be taken alone. Additional help is essential to stay on the path.

One of the ways Luther Seminary supports leaders and churches is through the Faith+Lead platform. This online learning hub provides opportunities for pastors and congregations to dig into the intricate work of evolving ministry practices and ideas, offering courses, podcasts, articles, events, and a social network that facilitates connections. Those tools are especially important for faith leaders who are facing difficult conversations—including ones about race—with congregations hesitant to engage in ideas and practices that are new to them.

Members of Luther’s enterprise leadership team spent time at their fall retreat focused on the current landscape of the seminary’s own diversity and equity leadership training and what shape it can take in the future. The seminary’s leadership recognizes the important role the institution plays in helping faith leaders and their congregations to adapt their methods, including addressing race and racism, while staying faithful to their calling.

It can start, said Leon Rodrigues, by agreeing to enter into what he calls holy conversations.

“Just because we as individuals don’t know about something doesn’t mean it doesn’t exist,” said Rodrigues, Luther Seminary’s chief diversity officer and director of diversity, equity, and inclusion. He recommends “inviting people into conversation, and even if we have differences, first agreeing to a set of guidelines. We are there to learn, listen, love each other, think, and reflect.”

Listening to learn, not to respond, is crucial because race and racism are complex, deeply personal, and emotionally charged issues. For faith leaders, recognizing they may not be the ones who have all the answers can be especially difficult. That acknowledgment requires a vulnerability—a letting go—to get to a collectively stronger, better place as a community.

But always, Rodrigues says, the conversations must be built in love.

“We humans tend to default to competitiveness and not to compassion, caring, and love for each other. But we have to start with love. That’s what we’re called to,” he said. “If I love someone, and I know they are being harmed, I am going to step up. I’m going to reach out.”

A theology of showing up

As a contextual learning associate with Luther Seminary, David Scherer ’15 M.A. works to provide additional tools for faith leaders who may be working with community members resistant to change.

“Jesus comes for both personal and collective liberation, but we’re not finding ways to integrate that into our articulated theology,” Scherer said. “How did we get to this false choice of either focusing on personal salvation or on God’s liberating love and justice in the world?”

When Christians and faith communities talk about living the gospel, they must recognize that theology is built on justice and kindness. The seminary’s Beloved Community Scholars program works to instill this core understanding in Christian public leaders for the communities they foster.

“In so many churches, we’ve done the loving kindness really well, but we haven’t done the justice,” Scherer said. And it’s not a side project, he added.

“When we start to realize, ‘Wow, my own journey as a Christian, my faithfulness to God, is tied in with how I show up to this conversation,’ that’s when we start to develop this healing language together, and we start to dismantle the system tearing us apart.”

It won’t be easy

“To those leaders who are going to have issues with their congregation, one thing that always comes to mind for me is that God doesn’t give us anything we can’t handle.

But in some ways, that makes the work even more important, he said. As a Black member of First Lutheran, and a member of its leadership team, Dansby recognizes there are some crucial conversations that simply must be led by a church’s pastor.

Wilcox said she began introducing an understanding of race and racism by first assessing what resources she and her church community had available.

“What are the gifts and assets that God has blessed your community with that allow you to respond faithfully, with justice and with peace?” she said.

Almost inevitably, there will be some church community members who accuse leadership of bringing politics to the pulpit.

“We get accused of being too political at times, but in our baptism promises we say we will strive for justice and peace in all the world,” Wilcox said. “We don’t take that seriously enough.”

“To talk about race is political,” Roberts said. “You have to get tougher skin on that topic and know that you’re going to lose some people and gain some people. There are times in history when you need to be brave. You have to decide if now is the time in your community.”

“In your heart, you can know you are doing the right thing for your congregation and community,” Dansby said. “You are doing the thing that Jesus Christ is calling you to do.”

Showing up to serve