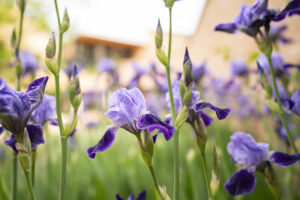 Timothy Coltvet ’98 M.Div., director of contextual learning, co-wrote an essay with Matthew Floding and Jennifer Davis titled “Perceptions of Matt Bloom’s Flourishing in Ministry: How to Cultivate Clergy Wellbeing,” in the Spring 2022 issue of Reflective Practice. The essay includes input from Timothy Schroeder ’18 M.Div., senior admissions counselor; Rene Mehlberg ’18 M.Div.; and Joshua Kestner ’17 M.Div.
Lowell Erdahl ’57 M.Div., former bishop of the St. Paul Area Synod of the ELCA and assistant professor ofhomiletics at Luther from 1968 until 1973, died December 14, 2021. Not a clergyman who sat on the sidelines, he marched in antiwar demonstrations during the Vietnam War, joined with other religious leaders to oppose U.S. military intervention in Iraq, blasted welfare cuts proposed by the Minnesota Legislature, and joined a protest against a constitutional amendment to ban same-sex marriage. He wrote 10 books, including “Be Good to Each Other,” a book about marriage that he wrote with his wife.

James Limburg ’61 M.Div., professor emeritus of Old Testament, died November 29, 2021. Limburg joined Luther Seminary in 1978 as a visiting associate professor before his promotion to professor in 1982 and retirement in 2001. The noted Psalms scholar previously taught for 16 years at Augustana University in Sioux Falls, South Dakota, where he was a longstanding member of the brass quartet. The late Sheldon Tostengard, who was a professor of homiletics at the seminary, once said the creative Limburg understood the nature of “the chapel talk” better than anyone. After a thematic sermon on trumpets, chapel worshipers surged to their feet with applause (which didn’t please Jim). His many books included commentaries on Psalms, Jonah, and the first six minor prophets, as well as the much loved “Psalms for Sojourners.”

Karen Gulsvig Johnson, who served as dean of students at Luther Seminary in the 1970s, received the Luther College (Decorah, Iowa) Distinguished Service Award in October 2021.
Professor and Carrie Olson Baalson Chair of Youth and Family Ministry Andrew Root published “Churches and the Crisis of Decline: A Hopeful, Practical Ecclesiology for a Secular Age” in March.
Lee Snook, professor emeritus of systematic theology, died December 23, 2021. Snook was called to the Luther Seminary faculty in 1970. He introduced process theology, which brought to Luther a new way of seeing God in the world, and established contacts in Africa that continue to shape Luther today. From 1986 to 1989, Snook served as a visiting professor at the University of Zimbabwe. Starting in 1992, he established a student program in Harare, Zimbabwe, where he spent three or four months each year until he retired in 1999. He wrote many essays and books, including “What in the World Is God Doing? Re-imagining Spirit and Power.”
Norman Wente died December 30, 2021. The former director of the Luther library oversaw the merger of the libraries of Northwestern Lutheran Theological Seminary and Luther Seminary as a precursor to the official merger of the two institutions in 1982. During his tenure, the Rare Book Room was created. He helped establish the Lutheran International Library Assistance Project, which donates books to seminary and Bible school libraries in developing countries. Wente oriented students to the library by noting that “the same architects who designed St. Olaf College repeated all of their mistakes in this building.” He is remembered for his love of music, flowers, travel, and family.