Terence Fretheim was first connected with the Luther Seminary faculty as a teaching fellow in Greek in 1958-60 while he was still a seminary student. He returned as assistant professor in 1968 and became professor of Old Testament in 1978. He was dean of academic affairs (1978-88) and also served as acting chair of the Old Testament department (1977-78) and chair of the curriculum committee (1976-77).

He was an instructor in Old Testament at Augsburg College and Seminary, Minneapolis, in 1961-63, and assistant professor of religion at Augsburg College in 1967-68. Ordained in 1968, Fretheim was pastor of Dennison (Minn.) Lutheran Church in 1968-71. He has been visiting professor at McCormick Theological Seminary in Chicago, and both visiting professor and lecturer at the University of Chicago Divinity School.

He is a member of the Catholic Biblical Association and the Society of Biblical Literature and is Editor of SBL Old Testament Monographs. He has served on the Buddhist and Muslim Task Forces of the American Lutheran Church, was co-chair of the Theological Consultation for the Evangelical Lutheran Church in America, has been president of the Minnesota Consortium of Theological Schools, and Old Testament Book Editor for the Journal of Biblical Literature.

Fretheim has published numerous books.  More recent titles include: The Pentateuch (Abingdon, 1996); Proclamation 6 (Fortress, 1997); The Bible as Word of God in a Postmodern Era (Fortress, 1998; with K. Froehlich); First and Second Kings (Westminister, 1999); About the Bible: Short Answers to Big Questions (Augsburg, 1999); In God’s Image: A Study of Genesis (Augsburg, 1999); A Theological Introduction to the Old Testament (Abingdon, 1999), with B. Birch, W. Brueggemann, and D. Petersen; and Jeremiah: A Commentary (Smyth & Helwys, 2002). God and World in the Old Testament: A Relational Theology of Creation (Abingdon, 2005); Hope in God in Times of Suffering (with Faith Fretheim) (Augsburg/Fortress, 2006); Abraham: Journeys of Family and Faith (University of South Carolina Press, 2007).

In addition to many articles, other published notes include: 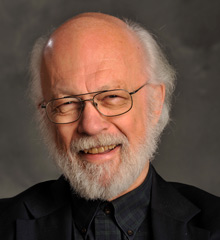