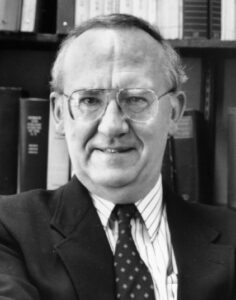 Limburg’s godson Rolf Jacobson, professor of Old Testament and The Alvin N. Rogness Chair of Scripture, Theology, and Ministry, said, “Jim was a magnificent teacher, gifted writer and preacher, a faithful follower of Jesus, and a formidable scholar.”

“I had the privilege of getting to know Jim, not initially as a teacher and scholar of the Bible, but as a trombone player,” said Luther Seminary President Robin Steinke. “When Jim was teaching at Augustana he was a longstanding member of the faculty brass quintet. I was invited to play second trumpet. It was a life-changing experience to play in churches and at various events with Jim telling stories, sharing the repertoire of songs he used to teach Hebrew and opening scripture in ways I’d never heard before. I thought if a trombone player knows this much about the Bible, I had better step up my knowledge, too! The road trips to these rural outposts of ministry revealed the love of God in the relationships he cultivated, the scripture he opened, and the music he played so beautifully.”

Jim Limburg came to the Luther Seminary faculty as visiting associate professor in 1978 and was promoted to professor of Old Testament in 1982. He retired in 2001.

His career began as a high school teacher in Ellendale, Minnesota, in 1956. Limburg was professor and chair of the department of religion at Augustana College, Sioux Falls, South Dakota, from 1962 to 1978. In 1991 he was guest professor at the University of Munich in Munich, Germany. He was a summer instructor at Bemidji State College (1973 and 1974) in Minnesota and Presentation Convent in Aberdeen, South Dakota (1978 and 1982). Limburg was ordained in 1974. After his retirement in 2001 he served as visiting professor of Old Testament at Pacific Lutheran Theological Seminary in Berkeley, California, (2002-04) and continued teaching, preaching, and writing in a variety of contexts.

Limburg earned a Bachelor of Arts from Luther College in Decorah, Iowa, in 1956 and a Master of Divinity degree from Luther Seminary in 1961. He received Master of Theology and Ph.D. degrees from Union Seminary in Virginia in 1962 and 1969. He participated in the America-Israel Society Study Tour of Israel and Greece in the summer of 1964 and Vanderbilt’s Graduate Summer Institute in Judaism in 1972. He also studied at the University of Michigan and Harvard. He and his wife Martha spent sabbaticals at the Universities of Heidelberg, Tübingen, Munich, and Münster in Germany.

Luther College honored Limburg with the Distinguished Service Award in 1978. He was a member of the Society of Biblical Literature.

His funeral will be at Zumbro Lutheran Church, Rochester, Minnesota, at 1 p.m. Monday, December 20, with visitation at noon.