The Region 3 Archives (covering the Dakotas and Minnesota) constitutes one of the largest collections of American Lutheran material in the United States. Beginning with largely Norwegian, Danish and Swedish Lutheran records (the 1840’s and on) and continuing to the present, the collection documents the full range of activities that marked the predecessor church bodies to the current Evangelical Lutheran Church in America. The finding aids were created to describe our holdings to the subseries level (in effect, to the “box level”), though there a few exceptions where greater detail has been used. The inventories are intended to provide an overall sense of our collections’ scope. While we hope that these finding aids will be helpful, we realize that some researchers will need us to provide greater detail than the inventories currently give. We invite these researchers to send their questions directly to the archives staff via e-mail, phone or mail. 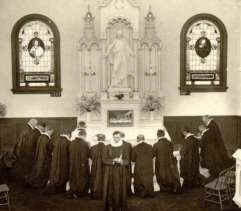 The “family trees” provided below are intended to help students of American Lutheran history make sense of the often bewildering array of Lutheran church bodies (or “synods”) that have existed in this country. As some of the church body names indicate, the divisions were often based on the country of origin and ethnic background of the immigrant-founded synod. Differences in worship traditions and polity, in addition to the language used, also contributed to the “splintering” of American Lutheranism.

Forming the Lutheran Church in America

The Emergence of the Missouri Synod

The Evangelical Lutheran Church in America was formed in 1988 with the merger of the Association of Evangelical Lutheran Churches (1976-1987), the American Lutheran Church (1960-1987), and the Lutheran Church in America (1962-1987). This 5 million member denomination is divided into 9 regions and 65 synods. The archival headings described below comprise collections gathered by the Region 3 Archives since 1988. While some of the span dates below indicate pre-1988 material, these records were gathered and maintained by the Region 3 Archives in their original order and so left intact. The variety of these materials reflects the broader collection strategy of the Archives since the beginning of the ELCA.

Of special interest to researchers are the congregational and the biographical files (indicated below). The files on congregations document the Lutheran church in this country at the “grass-roots” level as no other record is able to do. The +2,500 files on both existing and closed congregations include a range of materials from news clippings and history booklets to photographs and other audio-visual materials. The +2,000 biographical files contain a wide range of items documenting the lives of prominent and clergy and lay persons in the Lutheran church. These files exist along side of, and make reference to, the larger collections of personal papers described elsewhere in the Luther Seminary Archives inventory and in the Region 3 Archives inventory.

The Norwegian Synod, 1853-1917, with its headquarters in Decorah, Iowa established congregations in the earliest immigrant communities in the Upper Midwest. This group was characterized by adherence to theological orthodoxy and strong ties to the Church of Norway “high church” tradition. Luther College in Decorah and Luther Seminary in Saint Paul were their main educational institutions with mission efforts in China and South Africa. Records span the period 1851-1917, and run to roughly 9 cubic feet. Serial records and documentation of early Norwegian-American Lutheran activities in both domestic and international mission work predominate in the collection.

The Hauge Synod, the most numerous Norwegian pietistic group, separated from the “Eielsen Synod” in 1876. Named for the evangelical lay preacher and religious reformer of 18th and 19th century Norway, Hans Nielsen Hauge (1771-1824), the group de-emphasized formal worship and stressed personal faith experience. Reflecting a “low-church” Lutheranism, the Hauge Synod records revolve around domestic and international missions activities and annual reports, featuring a highly informative scrapbook of the Mission Dove, the women’s auxiliary of the mission effort. The size of materials listed below indicate a book binding approach with the records rather than the typical archival box approach.

Roughly 12 cubic feet of records document the first merger within Norwegian-American Lutheranism, as it joined the pietist Norwegian-Danish Augustana Synod with the Conference for the Norwegian-Danish Evangelical Church and the Anti-Missourian Brotherhood, a splinter group from the Norwegian Synod. It steered a middle course between “high” and “low church” factions within Norwegian–American Lutheranism. This church body was associated with St. Olaf College (Northfield, MN), Augustana College (Sioux Falls, SD) and Concordia College (Moorhead, MN). Its seminary, known to most as simply the “United Seminary” was located in the St. Anthony Park neighborhood of St. Paul, the current location of Luther Seminary. Major foci in this collection include annual reports, mission activities, and congregational records, including 16 volumes recording congregational visitations, 1899-1915.

A consciously Norwegian response to the predominantly Swedish Augustana Lutheran Synod, the NDC sought a middle way between pietist and state church extremes of Norwegian-American Lutheranism. Scanty records include Conference reports, 1870-1889 and correspondence for the period 1887-1890, as well as congregational records 1874-1886. In 1890 the Conference joined with two other groups to form the United Norwegian Lutheran Church.

The first formal synodical organization of Haugean pietists was formed in 1846 by firebrand preacher and early settlement leader Elling Eielsen. Formally designated the Evangelical Lutheran Church in America, it was characterized by an emphasis on personal affirmation of religious faith, congregational autonomy, and a narrow toleration of religious heterodoxy. Rampant sectarianism rapidly dissolved the Eielsen Synod surrounding the character of the synod leader, culminating in the departure of its largest contingent to form the pietist Hauge Synod in 1876. Remnants of the synod continued into the twentieth century in villages, congregations, and individual families, decreasing to merely three families at the present time. Records fill one 4-inch document case with five folders of official documents of the synod and three folders of subsequent historical explorations regarding its stormy history.

Under the dynamic leadership of Georg Sverdrup, the Lutheran Free Church (LFC) emerged from the United Norwegian Lutheran Church surrounding controversy regarding the future of Augsburg Seminary and College, Minneapolis. The Church focused on congregational autonomy within a minimal denominational and credal identity. Liturgically “low church,” its records reflect a broad array of church activities, amounting to 70 cubic feet of records. These document the church’s educational and missions activities, while publications and records of the Presidents Office are also notable.

Disparate, but sustained efforts at inter-Lutheran cooperation began in the late nineteenth century. Some cooperation was functional (nurses, music, etc.); other cooperative efforts were more explicitly ecumenical. Documentation tends to comprise programs and reports and other published materials from these various joint activities.