Luther Seminary throughout the years

In 2019, Luther Seminary marked its 150th anniversary with celebrations including the publication of Professor Mark Granquist’s book “A History of Luther Seminary: 1869–2019” (December 2019, Fortress Press).

Throughout his career, Granquist—the Lloyd and Annelotte Svendsbye Professor of the History of Christianity at Luther Seminary—has written several books on the history of Lutheranism, from Martin Luther and Scandinavian movements of the past two centuries to the development of Lutheran faith and practice in North America until present day. “A History of Luther Seminary” presents fascinating glimpses into the institution’s growth and moments of transformative change, some of which are mentioned below.

The seminary’s 125th anniversary celebration, in 1994, included the publication of school history, “Thanksgiving and Hope.” If you would like to receive a complimentary copy of “Thanksgiving and Hope,” please contact us and we will be happy to send you one. It is a collection of essays chronicling the people, events, and movements in the antecedent schools that have formed Luther Seminary: 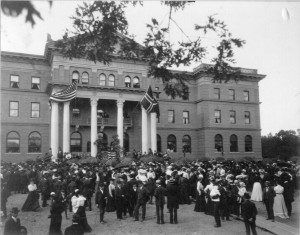 Each of the three churches operated a seminary: the Norwegian Synod operated Luther Seminary, located near Hamline Avenue in St. Paul, Minnesota; the Hauge Synod operated Red Wing Seminary in Red Wing, Minnesota; and the United Norwegian Lutheran Church operated the United Church Seminary on a portion of the present site of Luther Seminary in St. Paul. The merged seminaries occupied the site of the United Church Seminary on Como Avenue and Luther Place, and retained the name of the oldest of the three schools, namely, Luther Theological Seminary, which had been founded in 1876.

When Luther Theological Seminary was united with Augsburg Seminary in 1963, Luther, through the process of merger, assumed the earlier founding date of 1869.

At the time of the formation of the Lutheran Church in America in 1962, Northwestern Lutheran Theological Seminary was placed under the jurisdiction of two supporting synods: the Minnesota Synod and the Red River Valley Synod.

Desiring to make a witness to their common faith, Luther and Northwestern Seminaries functionally unified in 1976, beginning with a single administration. After a period of six years, during which a common curriculum as well as common admission and graduation requirements were developed and cross-registration was encouraged among the student bodies, the governing agencies of the two seminaries set in motion the planning process which culminated in the establishment of a single seminary on July 1, 1982, known as Luther Northwestern Theological Seminary.

The name Luther Northwestern Theological Seminary was changed to Luther Seminary on July 1, 1994.